Mick Harper wrote: I have just finished a very odd book called The Trojan War of 650 BC by Alan Wilson and Baram Blackett. More perhaps on this later.

Looking forward to reading your review.

For parity of effort, I'll just mention I have just acquired a brand-new copy of a collectors item: All Done With Mirrors by John Neal. Likewise, more perhaps on this later, after I get through the backlog, starting with a book on the Irish Egyptians.

What do we know about Sun Discs?

According to popular-archaeology.com:
an early Bronze Age sun-disc from Monkton Farleigh in Wiltshire, U.K., is being exhibited for public view at the Wiltshire Museum, 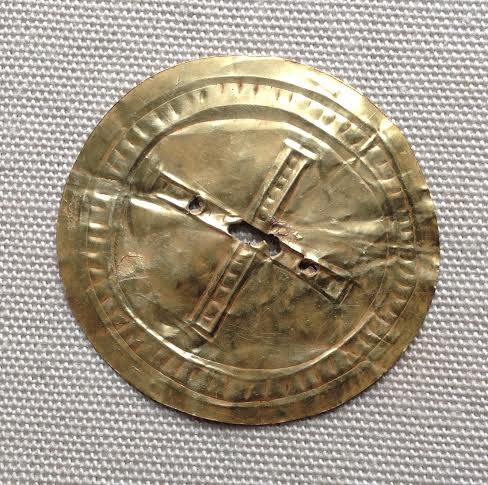 Monkton Farleigh is just over 20 miles from Stonehenge.

The dimpling seems to have been designed to reflect light. It would be ideal as a reflector to sit on the end of the cross (if a larger version used at Stonehenge). I used a similar plate arrangement for the demo tests to check if Stonehenge would work (full 33% scale model in background) 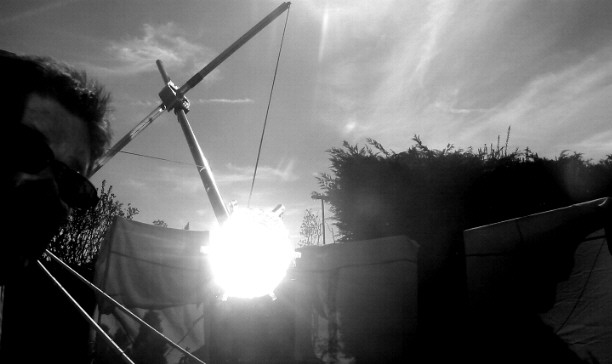 PS if you flip to the end of the book Boreades, you can see more detail on the arrangement in one of the last chapters.

This is the book it's in: Link only works if you right click and then open link in new tab: http://www.amazon.co.uk/Stonehenge-Solving-Neolithic-Universe-Expanded-ebook/dp/B00G4CWIIK/

The Sun Disc also carries a pattern familiar elsewhere in the world as the Medicine Wheel.

Most often thought of in association with North America folks.
https://en.wikipedia.org/wiki/Medicine_wheel 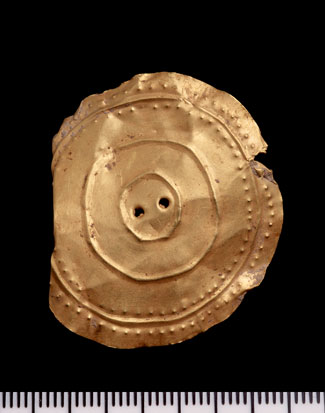 Confusingly, this "Copper Age to Early Bronze Age 'sun-disc'" was discovered in a "Roman Lead mine" in Wales.

This is the website...
http://www.antiquity.ac.uk/projgall/timberlake/
.. but the choice of colours there is so bizarre it hurts my eyes!

They talk of similar discs being found in Ireland, Wales, Kirkhaugh, Northumberland , Isle of Man, Wiltshire and Brittany.

The minutes of the Stonehenge Round Table meetings are a treasure trove of intriguing tit-bits.

In the latest minutes, under "Special Access", it was noted:

A Forum member reported that he had seen a group in the stones during the hours of darkness on 22nd June 2013. He enquired as to who this group were and why they were allowed in the stones at this time. He expressed concerns over their form of worship. ACTION: LB to look into this with NB and report back to member.

It is reported that a group that was let into Stonehenge to greet the sunrise a few Sundays back (on Midsummers Day, not at the main solstice gathering) was heard from some distance away loudly chanting “Hail Satan”.

During Managed Open Access for Summer Solstice at Stonehenge, we support all individuals and groups conducting their own forms of ceremony and celebration providing that they are mutually respectful and tolerant of one another.

Should we be surprised that even Satanists can claim Equal Rights? Just as long as they are respectful and tolerant?

Sadly, that probably rules a TME group out. We're just not respectful or respectable enough.