So, the peasants say oh, never seen that before, oh yes I ave. It's been ere for thousands of years and the vicar told me so.

That's how it works eh?

Tell the stupid plebs that they've got the holy fingernail and they have been here all his life and the silly plebs will say OK guv we believe yer.?

If you care to say what you mean in ordinary English, I will endeavour to meet your point, whatever it is. This habit of constant jocularity grows wearisome.

1. Amber carving: The figure of a toga-clad actor carved from a block of amber was recently found at Scotch Corner. Thought to have been made in Italy during the 1st century AD, a similar example was also found at Pompeii. Nothing like this has ever before been found in the UK. Its presence at Scotch Corner, along with a large number of other high status imported items suggests this was an early site furnished with the finest Roman goods.

Careful ignoral of east coast beaches full of amber not far from there.

2. Coin Workshops: Workshops for making gold, silver and copper coins found near Scotch Corner represent the most northerly example of coin production ever found in Europe. They demonstrate that the Romans were carrying out significant industrial activity in this part of England and potentially producing coins of high value.

Because the locals were obviously too ignorant to have done it themselves.

3. Roman shoes: A number of well-preserved Roman leather shoes have been found in Catterick, a town south of Scotch Corner known by the Romans as Cataractonium. Large sheets of leather have also been found in the town, perhaps used for producing clothes, indicating that the town was an important leatherworking centre possibly supporting the Roman military.

Because the locals were obviously too ignorant to have worn shoes.

Lock 'em all up

4. Roman keys: Many keys have been found at Catterick, from small keys on rings to larger ones for lifting latches. The amount found is unusual for a northern suburb, suggesting people who lived in the town were conscious of protecting their valuable possessions.

Because the locals were obviously too ignorant to have ...

5. Silver ring: A silver ring shaped like a snake which wraps around the finger has also been found in Catterick. This is a rare find and like the amber figure, it hints at the great wealth of the people who lived here.

If you were wealthy, would you live in Catterick?

6. Pen and inkpot: A pewter inkpot and a number of styli, Roman pens, have also been discovered at Catterick, telling us that the town was a key administrative centre. The sheer amount of pens found suggests that a significant proportion of the population were able to read and write.

Because a significant proportion of the population kept losing their pens?

Some wealthy people would like to live there. They have a thing about soldiers.

What you have described is a large industrial centre which eventually rebelled against the Romans. The inhabitants presumably set up shop for themselves. Changed the names on everything and put up signs saying under new owners open as usual.

Which might go some way to explaining the Battle of Catraeth.

This has always been seen as an attack on wicked Saxons taking the country over. But the troops involved came from Edinburgh and included what we would call Welshmen from various areas. Edinburgh is a fair distance from Catterick and would not normally have been affected by the place. Unless it was in competition of course. If the lads of Edinburgh were really going for the Angles why not go for the people closer to the border?

If Catterick was a thriving comercial centre as well as an administrative centre and military centre, as it is today in the latter respect, it would be a prime target for a battle plan that was a year in preparation.

The usual interpretation of the poem is an anti English one but it's also suggested that it is a satire on a vainglorious 'Celtic' aristocracy which spent a year drinking before going off to their deaths.

Wiki tells us that this area of the country was home to the Votadini but as another article shows they were not there. They were kept back by the Yorkshire lads of the Brigantes. I wonder if Votadini has a connection with Woden? 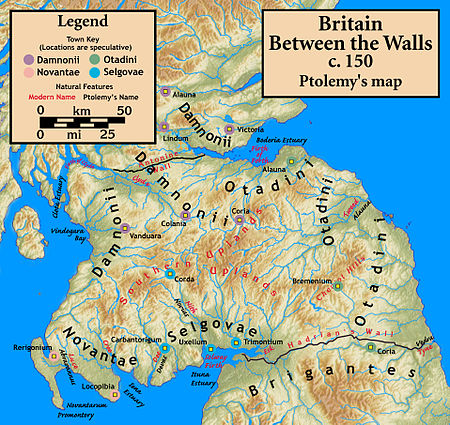 I would suggest that Catterick was still populated by its original inhabitants from Roman times, or rather their descendants. It's a perfect centre for trade and transport and is set in miles of very good farmland. I can't see them giving it all up to gangs of marauding Saxons coming up from Kent. These were well trained people as the men from the north were to find out.

Another thing to consider is the origin of the square or oblong houses we are told makes these people not Celts who built, we are told, round houses. They had been occupied for nearly five hundred years and obviously picked up on the new architectural styles. Especially if they lived in an army garrison town.

Others would say it was all made up by the Normans so why bother anyway. No answer to that one.

Even the dunderheads at the National Library of Wales concede this Battle of Catterick's only existence is from a poem in a 1265 manuscript. My own view is that the manuscript is actually an eighteenth or nineteenth century forgery. Why? Well, because calling Catterick 'Catreith' and Edinburgh 'Din Eidyn' is a giveaway. These forgers couldn't afford to be too subtle in case the dunderheads wouldn't get the connection at all!

Catrice is mentioned in the Domesday book.

But it is also mentioned in an interesting way by Ptolemy. It is one of the 'climes' which were the Greek divisions of latitude.

So it's possible Catrice held an important position not just locally but globally.

Present-day Edinburgh was the location of Din Eidyn, a dun or hillfort associated with the kingdom of the Gododdin.[5] The term Din Eidyn first appears in Y Gododdin, a poem that depicts events relating to the Battle of Catraeth, thought to have been fought circa 600. The oldest manuscript of Y Gododdin forms part of the Book of Aneirin, which dates to around 1265[6] but which possibly is a copy of a lost 9th-century original. Some scholars consider that the poem was composed soon after the battle and was preserved in oral tradition while others believe it originated in Wales at some time in the 9th to 11th centuries.[7] The modern Scottish Gaelic name "Dùn Èideann" derives directly from the British Din Eidyn. The English and Scots form is similar, appending the element -burgh, from the Old English burh, also meaning "fort"

Most valuable. You confirm that orthodoxy's view that Edinburgh is a 'Celtic' town relies entirely on this poem (whether it was written in 1265 or 1765). Either way it is useless as evidence for Edinburgh's early history. Our own view of course is that it is an English name. Burgh does not mean 'fort', it is just the normal suffix meaning an enclosed space. The Scottish equivalent of the English 'borough'. As the chief 'enclosed space' of Scotland, i.e. the capital, they built a fort there.

It was probably the broch or burh or burgh or burg or bourg or borrow of the tribe called the Dini or the Deni or something like that.

Unless it is the borough of good king Edin of course.

Besides which the Celts were a French tribe. Not a British tribe.

The southern boundary of the 'Scots' on the west came down through Cumbria and finished up on Stainmore Common in North Yorkshire. But then foreigners don't understand the north do they?

I don't mind who they were or how low they got as long as they were people speaking roughly the same language spoken in Edinburgh today. Plus ça change.

But it is also mentioned in an interesting way by Ptolemy. It is one of the 'climes' which were the Greek divisions of latitude.

Tisi, you are a genius. If you were here I would kiss you.
You have just given me the missing piece in my jigsaw picture of how fractional latitudes relate to time-keeping.
Many thanks, and may God bless all who sail in you.