Did the Celts take ponies everywhere?

The peasants or the horses?

Ooh Borry you are awful. But I like you.

The peasants of course. Unless it was the horses.

Oh well horses for courses unless it's the peasants that is.

Nowt like keeping it in t'family that's what we always say.

Some say:
The breed was developed from Flemish stallions imported to Scotland and crossed with local mares.
http://en.wikipedia.org/wiki/Clydesdale_horse

Where did the Flemish stallions come from? 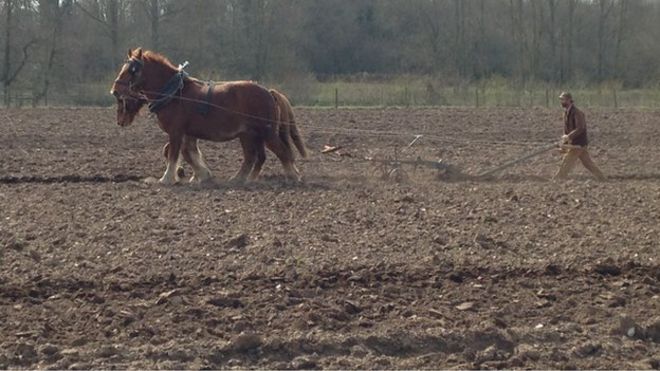 Here's a latter day Celt with his ponies.

If they are ponies, that must be a midget Celt. Or perhaps a Hobbit.

Celtic adventures is very much the theme of the new series just started on BBC.

The Celts: Blood, Iron and Sacrifice.

With all the high-status ritual goods, battles and death that TME would expect as par-for-the-course from ortho-media archaeologists. But with a few glimmers of our own orthodoxy starting to shine through at the end of episode one: the Atlantic Fringe, trade by sea, and migrations from west to east.

How did wild horses get from North America to Central Asia?

Watching an old episode of QI on youtube last night I was surprised to hear Stephen Fry tell the team that camels, dogs and horses had all originated in America and had made their way across the land bridge to Asia before the last ice age. He made it seem as though this was common knowledge but didn't say where he had got the information from.

The BBC has now put an article online telling us that human teeth have been found in China which are thousands of years older than they should be if we follow the traditional 'Out of Africa' theory. Although that doesn't stop them from trying to fit the evidence into the theory.

"It was very clear to us that these teeth belonged to modern humans [from their morphology]. What was a surprise was the date," Dr María Martinón-Torres, from University College London (UCL), told BBC News.

"All the fossils have been sealed in a calcitic floor, which is like a gravestone, sealing them off. So the teeth have to be older than that layer. Above that are stalagmites that have been dated using uranium series to 80,000 years.

This means that everything below those stalagmites must be older than 80,000 years old; the human teeth could be as old as 125,000 years, according to the researchers.

It apparently throws the out of Africa theory back by 20,000 years which is inconvenient.

Passing that one by they get to grips with the question of why it took so long to populate Europe. Two possibilities proposed are that it may have been too cold for humans or perhaps there were too many Neanderthals there.

Dr Martinón-Torres said the study could also shed light on why it took Homo sapiens another 40,000 years to settle Europe.

Perhaps the presence of the Neanderthals kept our species out of westernmost Eurasia until our evolutionary cousins started to dwindle in number. However, it's also possible that modern humans - who started out as a tropical species - were not as well-conditioned as the Neanderthals for the icy climate in Eur

The cold doesn't seem to bother Eskimos, Lapps or any other people who live in very cold climates. It also ignores Neanderthal genes in modern Europeans and Asians.

It could be though that people originated in America and moved with their horses, dogs and camels into Asia then Europe and at some point into Africa. The latter for those who couldn't stand the cold?

“At that time, modern humans, Neanderthals and wolves were all top predators and competed to kill mammoths and other huge herbivores,” says Professor Pat Shipman, of Pennsylvania State University. “But then we formed an alliance with the wolf and that would have been the end for the Neanderthal.”

Apart from somewhat slyly suggesting hunting-gathering rather than herding was the basis of the man-dog partnership, Shipman avoids the most obvious question i.e. how humans from Africa (where there are no wolves) could wander northwards and by allying themselves with the local wolves eradicate a population quite at home with wolves.

But you can see the professor's dilemma. How else to explain the domestication of dogs when incontrovertible evidence turns up in northern Europe.

The idea is controversial, however, because it pushes back the origins of dog domestication so deeply into our past. Most scientists had previously argued the domestication of dogs, from tamed wolves, began with the rise of agriculture, 10,000 years ago, though other research has suggested it began earlier, around 15,000 years ago.

But Shipman places it before the last Ice Age, pointing to recent discoveries of 33,000-year-old fossil remains of dogs in Siberia and Belgium. Although they look quite like wolves, the fossils also show clear signs of domestication: snouts that are shorter, jaws that are wider and teeth that are more crowded than those of a wild wolf.

In the face of no evidence, but just a hunch, I still persist with my whimsical notion that wolves were one of the many factors that contributed to the development of chains of hilltop enclosures, all one day's walk apart, all over loads of Britain. At night, the enclosures kept the wolves out and the domesticated livestock in.

Nowadays, the garden fence and my domesticated dogs help keep the foxes out and protect my hens. But the principle is much the same.

Your whimsical notion, Borry? I thought it was mine. No doubt a case of 'great minds'.