Did the Celts take ponies everywhere?

Neanderthals and modern humans were interbreeding much earlier than was previously thought, scientists say.

Traces of human DNA found in a Neanderthal genome suggest that we started mixing with our now-extinct relatives 100,000 years ago.

Previously it had been thought that the two species first encountered each other when modern humans left Africa, about 60,000 years ago.

This has got the Beeb in a bit of a tizzy. How could they be interbreeding forty thousand years before we left Africa? Unless they did it by post of course.

Or it could be that the whole out of Africa theory is a load of tosh.

If they have found a fossil from 100,000 years ago what's the betting it was not the first 'contact'. That they may have been there another hundred thousand years before that.

If early humans were having sex with Neanderthals 100,000 years ago, then they must have been doing so outside of Africa because our close relatives were not found there.

And this means that they had left Africa before the larger dispersal that took place at least 40,000 years later.

This adds to the idea that early forays out of the continent took place. Other recent evidence includes early human fossils found in Skhul and Qafzeh in Israel, and recent research that suggests people were living in China at least 80,000 years ago.


So, the evidence is mounting up that humans were outside Africa even further back in history. Perhaps they've got it all wrong. Perhaps some humans left their northern or asiatic homelands and went to Africa to live and those who stayed behind in the cold needed a bit of company at night?

There's some evidence that the Neanderthals never really died out.

Given the admiring cooing noises my wife and daughter were making over some of the French rugby players last weekend, I suspect that there was no shortage of interbreeding between Neanderthal men and "modern" human females.

Nah. That's a hobbit next to the bloke with the furry sporran.

Here's a neanderthal from BBC central casting. It looks like they are getting better looking as the revisions are er revised although they do still call them 'heavy browed' and 'stocky'. 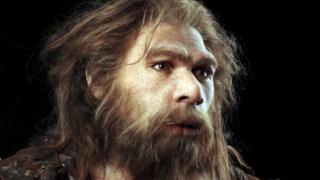 By the way, re the hunting-gathering and the man-dog partnership, I just happen to be reading West With the Night, the 1942 memoir by Beryl Markham.

Most of the book is to do with her pioneering aviation expoits
e.g.

On 4 September 1936, she took off from Abingdon, England. After a 20-hour flight, her Vega Gull, The Messenger, suffered fuel starvation due to icing of the fuel tank vents, and she crash-landed at Baleine Cove on Cape Breton Island, Nova Scotia, Canada ... In spite of falling short of her goal, Markham had become the first woman to cross the Atlantic east-to-west solo, and the first person to make it from England to North America non-stop from east to west. She was celebrated as an aviation pioneer.

(If she had started further west than Abingdon, perhaps she wouldn't have had to crash land at Baleine. But that's another story.)

The first few chapters are about her growing up in Africa, with a quite gripping account of her running barefoot in the bush and hunting with dogs and the local tribesman. Whereas the BBC-type accounts tend to have a greenish-idyll aura about them, Beryl Markham's account has the ring of truth. It could take you hours of running just to catch-up with your prey and corner it. Then you and your dogs were quite likely to get chewed to a bloody pulp or killed by your prey while you were trying to kill it.

Here's the San people of the Kalahri showing how it should be done.

By the way, just because people were hunters didn't mean they kept on the move and didn't have settlements. Perhaps the people who did that were nomadic hunters following migratory animals? 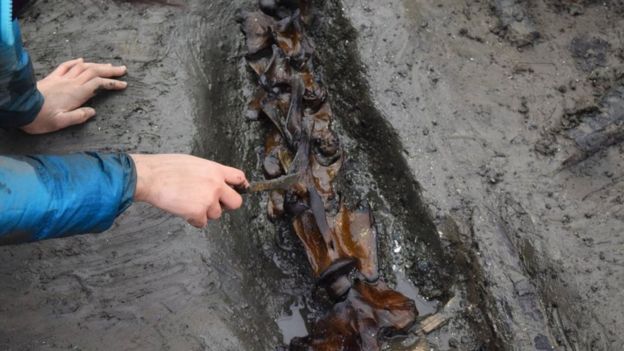 Here's a picture of a Bronze Age horse, or what's left of it, at the Peterborough dig.

And a wheel of the cart it may have been used for pulling. 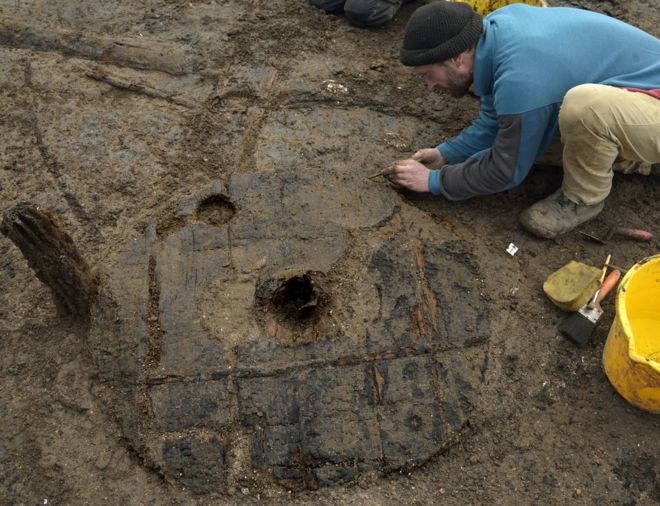 I find it interesting that the wheel was made of sections stiched together. Perhaps boat building techniques were used in other areas.