Ma wee cousin Barry MacBoreades has pointed out that the TME Map is still woefully lacking in some areas. Like the Western Isles and west coast of Scotland.

To try and make amends, I have just added a couple more.

When I clicked on the link, the Templars said, "tme.carto.com refused to connect." It doesn't surprise me, I'm known to them.

But when I used my super-powers and got the full link, it did. (Nice map!) If this is a general fault, let me know and I'll get our man to sort it. I don't think he's a Templar.

The site of Perdigões comprises a set of ditched enclosures located in the municipality of Reguengos de Monsaraz, Évora district, in the Alentejo hinterland (South Portugal).

The Perdigões Neolithic “Woodhenge” discovery is remarkable because nothing like it has ever been found in Portugal before. Archaeologists discovered the new Neolithic “Woodhenge” within the Perdigões complex in southeast Portugal. The complex is one of the most important late Stone Age sites in the Iberian Peninsula, built around 5000 years ago, in the Middle Neolithic period. The 16-hectare (40-acre) site has many concentric ditched enclosures.

Could have been built before Woodhenge. Or after. Or at the same time-ish.

What is striking about the discovery is that it is not like anything else found in the region. The characteristics of “Woodhenge” are almost identical to structures found in central Europe and the British Isles. One of the best known of these circular timber structures is the one found near Stonehenge.

Did they have the same sub-contractors as Woodhenge?

Alright guv? You know it's gorn past the Autumn Equinox dontcha? It's started getting cold and wet up north 'ere in Woodhenge territory. So we're just orf ter see ter another contract darn sarf where it's warmer for the winter. See yer later.

A new henge in Wiltshire.

As if Wiltshire didn't have enough already.

Wilsford Henge is the site of a Neolithic henge located west of the village of Wilsford, Wiltshire in the United Kingdom (grid reference SU09305732). The site was discovered from cropmarks in aerial photographs. The monument is situated within the Vale of Pewsey a short distance to the south of the large henge known as Marden Henge.

Now on the TME Map Of The Universe:
https://tme.carto.com/tables/the_megalithic_empire/map

Not quite a megalith, but who knew we are still building pyramids on the same latitude as Stonehenge?

Well, when I say "we", I mean The Palace of Peace and Reconciliation, or 'Pyramid of Peace', in Nu-Sultan, Kazakhstan, designed by Norman Foster and Partners (British firm, gor blimey, makes yer proud...)

Armenian historian Stepanos Orbelian, in his book History of Syunic (I—XII centuries) mentions that in the Tsluk (Yevalakh) region of Armenia, near the town Syunic or Sisian, was a village called Carunge, which means "stone treasure" or "foundation stones" in Armenian.

Doggerland has resurfaced - in a virtual sense.

Nice maps of what might-have-been if some of the "Greater Doggerland" had survived. This is clearly a fascinating "what-if?" subject area that several others have tuned into, in an OpenStreetMap style.
e.g. 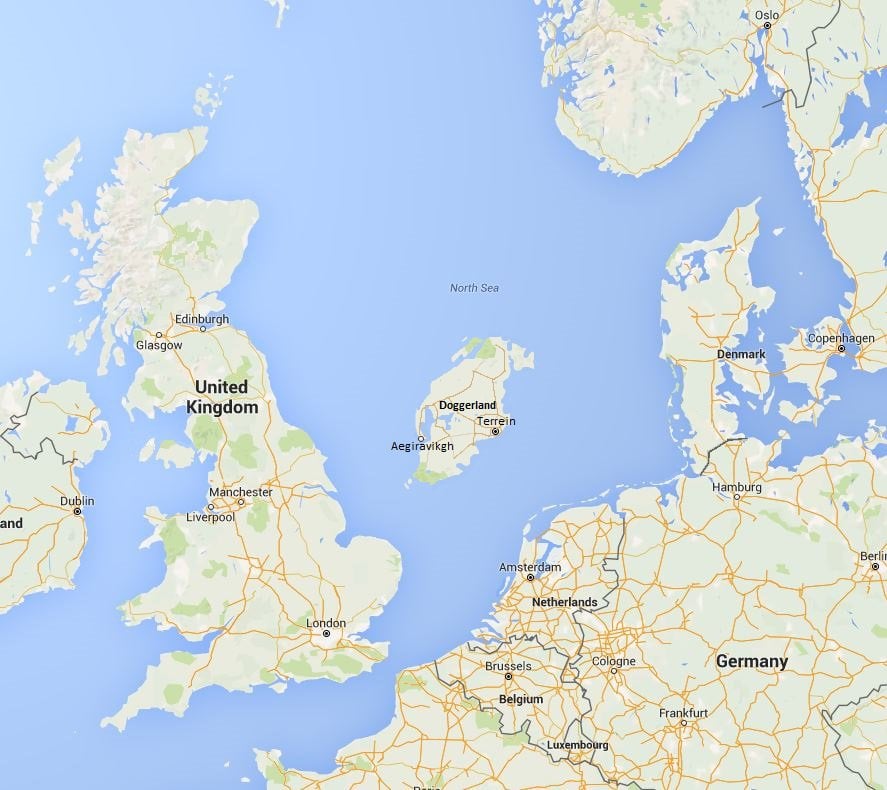 Or, the 1931 Dogger Bank earthquake

The Dogger Bank earthquake of 1931 was the strongest earthquake recorded in the United Kingdom since measurements began.

But it doesn't say when "measurements began" - might have been 1930 for all we know.

The effects were felt throughout Great Britain as well as in Belgium and France. The earthquake resulted in damage at locations throughout eastern England. The coastal town of Filey in Yorkshire was worst hit, with the spire of a church being twisted by the tremor. Chimneys collapsed in Hull, Beverley and Bridlington, and Flamborough Head suffered crumbling of parts of its cliffs.

There were also some curious reports of lights seen in the sky at the time of the shock. The shock was reported as being felt on board ship by a number of vessels in the N Sea.

It was also reported that a Hull woman died as a result of a heart attack caused by the quake. In London the head of the waxwork of Dr Crippen at Madame Tussauds fell off.

Someone's made an effort, but the colour scheme hurts my eyes!