It was dreadful, wasn't it? But I've learnt my lesson. This year I'd have my ride on The Scenic Railway roller coaster before I have the jellied eels, winkles, ginger beer and ice cream. Not after.

But what's this? Curses! I've been double-booked. Breaking news from Marlborough Running Club ....

With the Summer Solstice less than 3 weeks away it is time to start compiling a list of those that are interested in running to the stones this year.

Meeting in the Manton Down car park at 4:15 am for a gentle run across the Valley of the Stones and along the Herepath to Avebury. We arrive in Avebury just before 5 am, then mix with the usual Solstice crowds to watch and celebrate the midsummer sunrise. Because the sun has to rise above the Ridgeway hills, sunrise in Avebury is 5:08, about a quarter of an hour later than at Stonehenge.

Once the sun has risen we run around the stone circle, much to the amazement of the usual crowd of travellers, druids, and those just passing the time before heading to Glastonbury. Our run would end with a gentle jog back. Total distance covered about 7 miles. We would be back at Manton Down Car Park for around 6am.

If you are interested in running, please let me know, a reminder though, many of you have already signed up to the Longest Day 10K event in Chippenham the night before so may not want to do both!

Most of the run there-and-back is along the ancient Herepath (Green Street) passing though the sarsan boulder fields.

I may be persuaded to do the run blacked-up and wearing my Extreme Morris Dancing costume. (a.k.a. a well-disguised Devonian martial arts dobok)

Herepath surely means Army Route not Green Street. No doubt it isn't but who named it? And in what language?

Is there much difference between herds and troops in infrastructure terms? A ford would be perhaps especially wide, as indeed a trackway has to be, to cater for large numbers.

Wiki goes for the Alfred the Great connection.

A herepath or herewag[1] is a military road (literally, an army path) in England, typically dating from the ninth century CE.

In the Old English language the word here means "armed host".[2] It is also found as a prefix in compound words such as harbour (a burh with a garrison) and heretoga (a militia leader).[2] The term herepath has cognates in other Germanic languages in forms such as Heerweg (German) and Hærvejen (Danish). In all three languages, a herepath in later times simply denotes a road that was a via publica, maintained at central government expense

I would have thought that Alfred had more on his mind like burning cakes and trotting through the bogs to build roads all over the place for his army. Can't do it all at once while you're hiding and running away. Bit of a lad was Alfred.

But some people are beginning to doubt that he was all he made himself up to be. He was only building on what went before if I read it right.

Place-names containing such compounds as Old English here-pæð or fyrd-weg, both meaning “army road”, are especially important. But place-names also suggest the existence of elaborate systems of beacons and lookouts, often spaced at regular intervals, visible to each other and to known strongholds, and providing control over important route-ways. Written sources and archaeological excavation confirm that beacons were in use in the early 11th century. Landscape analysis is also helping to identify the important mustering sites, crucial to mobilisation, without which the military system would not have worked.

All of this would take planning and organisation over a long period of time. Could Alfred really have done all of this from his marshy hideout? Or was it already set in place?

Here's a link to the beacon experiment site.

As for language. Well, Old English has Wer as in werewolf which of course means man. So it would be a path for men, and presumably a path for soldiers. The Gaelic for man is fear which is really a variation on wer. In Gaelic though the letter and sound 'f' can disappear and become a 'h'. So it could be English or Gaelic. All to be found in Etymonline and Dwelly.

Perhaps Aberfeldy MacGregor has a section on it in her linguistic musings?

Or of course it could be from 'herd'. A path for cattle, a drove road.

Military roads tend to be built to pacify areas or countries. As in Wade's roads in Scotland. Funny how the same names pop up through history. But Alfred wanted communication routes. Would he waste time building special roads when his men could use the roads and tracks that had always been there?

Ya mean there's no evidence of Anglo-Saxons? Get outta heer.

Mick Harper wrote: Herepath surely means Army Route not Green Street. No doubt it isn't but who named it? And in what language?

Coincidentally, the Here Path is also the higher path. Or the High Road. Sticking (as it does) to the drier and higher ground across the Marlborough Downs and avoiding the river valleys. As did the other "military" roads across Wiltshire. Including all the old coaching routes across Salisbury Plain. Which are not the same as the drovers routes, which did go into the valleys to get water for slower-moving cattle.

It smells to me that the "Army Route" is like all the "hill forts" on the Ridgeway. Not forts, and only used by the military for a few years out of five thousand.

More dates to go in the Megalithic Calendar.

Especially for Harpo. Access via the Central Line from Knitting Hull and then the Ley Line from Glastonbury.

We are holding the 2019 Cloud Appreciation Society Sky Gathering on the beautiful island of Lundy, 12 miles off the coast of North Devon, southwest England where the Bristol Channel meets the vast expanse of the Atlantic Ocean. Aside from the island staff we will be the only people staying on Lundy, enjoying its charming range of characterful properties. There will be a range of fascinating talks, stimulating workshops and uplifting outdoor activities.
...
The Sky Gathering will be an opportunity to meet fellow Cloud Appreciation Society members and their friends from around the world. Escape from day-to-day pressures. Immerse yourself in something meaningful as you learn about the science, art and culture of the sky in this unspoiled island haven.

Book early to avoid someone getting your cloud.

Video here on how to reserve a space:
https://www.youtube.com/watch?v=O3F4GmbHl5g

It's getting closer to a significant time of the Megalithic year. Again. Victoria Derbyshire has been reading some Megalithically-significant news on Al Beeb today.

Stonehenge has been hosting Summer Solstice celebrations for about five millennia. But this year's event has been cancelled because of the virus obviously. Around ten thousand spectators usually gather at the ancient monument in Wiltshire to mark Midsummer on June 21st. English Heritage, which runs the site, says the sunrise will be streamed online for anyone who wants to watch it.

In an astonishing ad-lib and a break from the script, Victoria Derbyshire then said:

Or you could just get up and look at the sky yourself.

If you think the sunrise has been cancelled, and are concerned that English Heritage will be streaming a Fake News virtual version, please contact the BBC Complaints Department.

It would be a very dark day indeed if English Heritage really did cancel the sunrise.

At Chateau Boreades, we will be marking the event in our usual manner, with an excessive consumption of alcohol and a naked cavort around the grounds at dawn. Followed by a hearty Full Megalithic Breakfast with honey-roast free-range Wiltshire Bacon. Just another day in paradise.

It was time-of-the-year to put the clocks back here at Chateau Boreades.

The clocks on the mobile phone, TV and radio automagically fix themselves. We've found out how to reset the clock on the oven, by turning it off for 11 hours. Or was it 13?

Putting the clock back at Stonehenge was a bit more demanding. 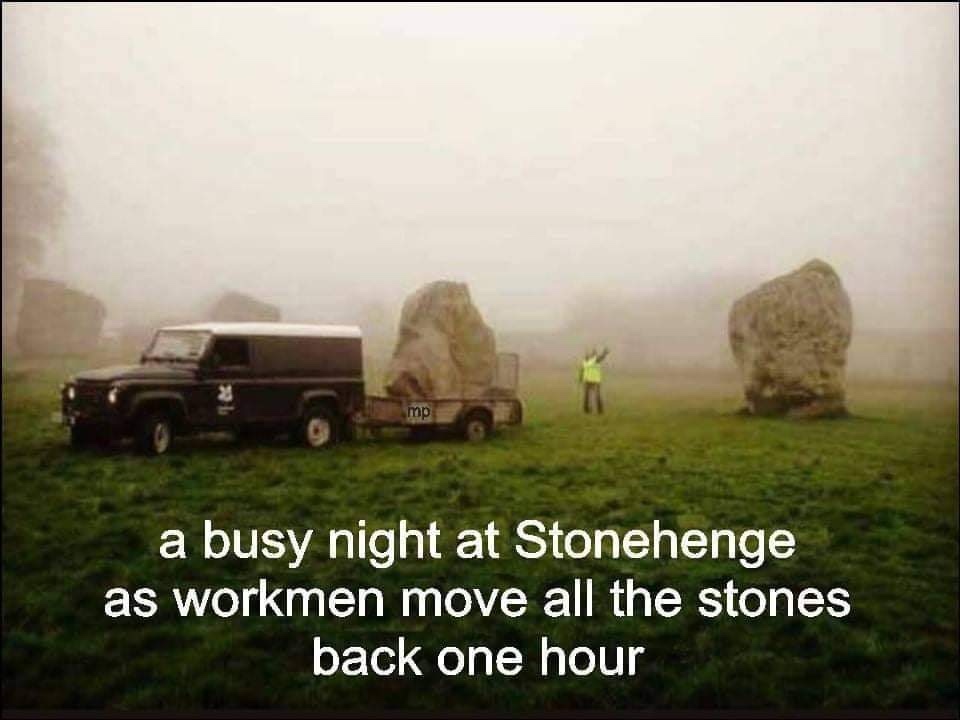 Eee, when I were a lad, a century ago, we had to start at the pub with a few pints, then round to the chippy for cod & chips before it shut, then all pile in the pack of a lorry driven by whoever had drunk the least, then truck down the A303 to Stonehenge, and stand among the stones, in the cold and mist, freezing our bits off with a runny nose, waiting for the sunrise. Then pile into the nearest Little Chef for a Full English breakfast and mugs of hot sweet tea to warm us up.

Set your alarm clock for these Live Streaming Videos (courtesy of English Heritage):