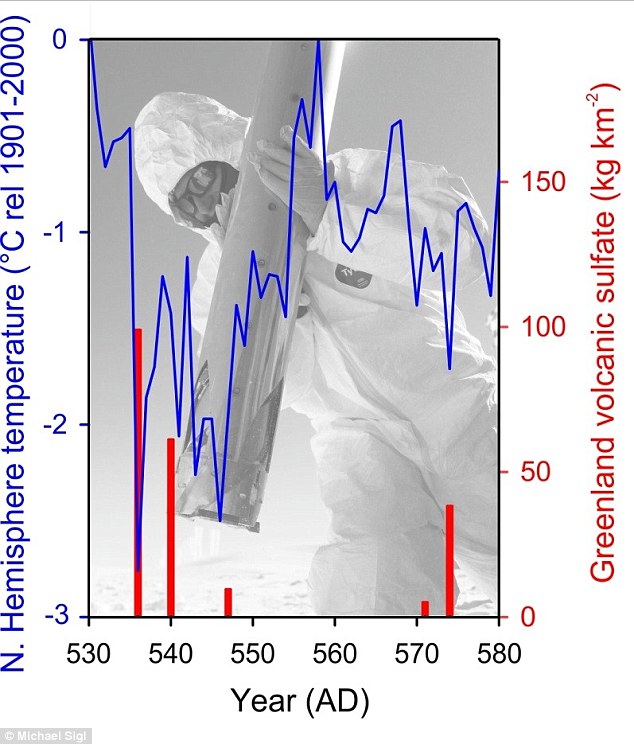 I couldn't find a topic that would fit in with the topic so here it is, courtesy of that repository of human knowledge the Daily Mail. Well, they printed the article taken from 'Nature'.

More evidence regarding the effect volcanic eruptions have on human life and migrations.

American scientists have compared ice cores taken from Greenland and the Antarctic and have ' reconstructed the timing and associated climate forcing of nearly 300 individual volcanic eruptions extending as far back as the early Roman period.'

'As a result, climate variability observed during more recent times can be put into a multi-millennial perspective - including time periods such as the Roman Warm Period and the times of significant cultural change such as Great Migration Period of the 6th century in Europe.’

The technique also allows scientists to look at the role that large climatic changes may have had in the rise and fall of civilisations throughout human history.

The study's lead author, Michael Sigl added: ‘With new high-resolution records emerging from ice cores in Greenland and Antarctica, it will be possible to extend this reconstruction of volcanic forcing probably all the way back into the last Ice Age.’

It could be that much of human history is based on accident rather than deliberate action. People were responding to natural disasters they had no control over.

I would concur, and (if I could find it) I would post the material I have posted elsewhere on the Decline and Fall of The Roman Empire that coincides with a massive downturn in the climate variability in Northern Europe. Which is the same as the Great Migration Period of the 6th century in Europe after taking out the "lost centuries" of that one of the the non-existant Dark Ages. Mick may have more to add on that score.

By the way Borry mon brave the same august organ, or should that be july organ has an article on the Aborigines in Australia. When they get their teeth into history they don't let go.

Anyway they tell us that the Australian Aborigines came from Africa, which I assumed everyone believed. Although I'm sure an emminence will harrumph no.

But they are now telling us that the Aborigines were the first people to leave Africa and settle in Australia 50,000 years ago.

Fair enough. But that means that people like Indians and Chinese left after them.

In which case why do the Aborigines still have an African appearance while Indians and Chinese do not?

Any ideas? Or were they all blown out by a giant volcano in Kenya at some point?

Do Indians and Chinese resemble each other?

And which part of Africa are the Australian Aborigines supposed to resemble?

That's the thing. Do Indians and Chinese look like Aborigines?

I don't think so. Yet they are supposed to have left Africa after the Aborigines so they should be just like the Africans they left behind. After all it was less than the 50,000 given for the Aborigines.

What do the Australian Aborigines say about where they came from?

By chance, I have some folk from Oz staying with us. If I remember I will ask them if they have any idea.

Having looked at some of the Haplogroup maps, I'm starting to wonder if there's more to the "Out of America" idea than I previous gave credit to.

From what I have heard the aborigines believe they fell out of the sky.

Regarding the haplogroups etc one thing that is strange is the one about blood groups.

Most of America, Native Americans that is, is 'O' as is Africa. That is the most common group.

I would assume that blood would start off all the same.

For whatever reason it changes once you get into Europe and Asia. I think they are finding even more groups as they spend more time on it.

And then there's the negative factor which is strange in itself. A sort of suicide blood group.

I think the usual explanation is that these blood groups changed in response to local diseases. But that should apply to Africa and America as well.

I think that some of the American tribes on the north east edge of the USA and perhaps Canada have other blood groups.

I didn't know that "blood groups change in response to local diseases". Is this really true or just a way of rationalising why certain people are reputed to be prone to what appear to be specific conditions?