The town is situated on massive deposits of salt, and salt has been extracted there since ancient times. The natural Droitwich brine contains 2½ lbs. of salt per gallon – ten times stronger than sea water and rivalled only by the Dead Sea.

During the Roman era the settlement was known as Salinae and was located at the crossroads of several Roman roads. Railway construction in 1847 revealed Roman mosaic pavements, and later excavations unearthed a Roman villa or corridor house some 44 yards (40 metres) long

Salt manufacture has remained the principal industry for the past 2,000 years

Yes, but not necessarily the salt trade. I have just discovered that Guernsey had a salt pan which, since they trade all over, must mean that salt was economic to get from the sea. On the other hand the salt pan is next to the Braye du Valle which is (was) the tidal channel between the two tidal islands of Guernsey and the Vale. This in turn suggests that tidal islands (whose function we have not yet discovered) may be involved in salt production.

Sea Salt or "white gold", as it has often been referred to, was the reason the island first became prosperous, but it was also the reason it was fought over. From time immemorial salt has played an essential role in preserving food and northern European herring fishermen came here for their supplies. An indication of its former importance is that the Island boasts consulates from Belgium, Denmark, England and Norway. The 10,000 tonnes of salt produced annually at the beginning of the 20th century has dropped to nearer 800 tonnes today, though there is currently a resurgence in production due to both the quality of the salt and tourist interest. The island is dotted with salt marshes and the square evaporating pans called "oeillets", are separated from one another by mud walls known as "bossis". The sea water is brought into the pans via canals or "etiers", which pass through reservoirs that get progressively shallower until arriving at the pans where the final evaporation causes the salt to crystallise, it is then carefully raked off, and left in piles to sun dry.
There are about 80 establishments still producing salt on the island and many have demonstrations of the process and a shop where you can buy their produce.

The salterns of Guérande is a swamp of salt water about 1 700 hectares in size. The current saltmarshes began before the 9th century and lasted for several centuries. Around the year 1500, the marshes reached 80% of the current surface. The latest were built around 1800. In the middle of the 19th century, a gradual decline started for different reasons : competition from a salt mine, lower consumption of salt as a product of conservation and improvement of transport by land. The salt of Guérande used to be traded throughout Brittany, tax free until Emperor Napoleon Bonaparte decided to tax it resulting in the beginning of a decline of salt activity.

Sea salt has been produced in Brittany and western France for a long time. It seems to be something people do wherever there is a coastline and salt marshes. And if there are no salt marshes you make some of your own.

I forgot to mention that Ile de Noirmoutier is a causeway island.

The island of Noirmoutier in the north of the Vendée is only half a mile off the coast at its closest, and at this point it is connected to the mainland by a beautiful bridge which was built in 1971, There is however a second and altogether more delightful way to get to the island and that is by way of "le Gois", a 3 mile long uneven cobble paved causeway, which is covered twice a day by up to 4m of water. Le Gois is visited by thousands of visitors a year who come to watch the road emerging from the sea as the ebbing tide recedes over the last cobbles or to see Le Gois disappear below the waves. 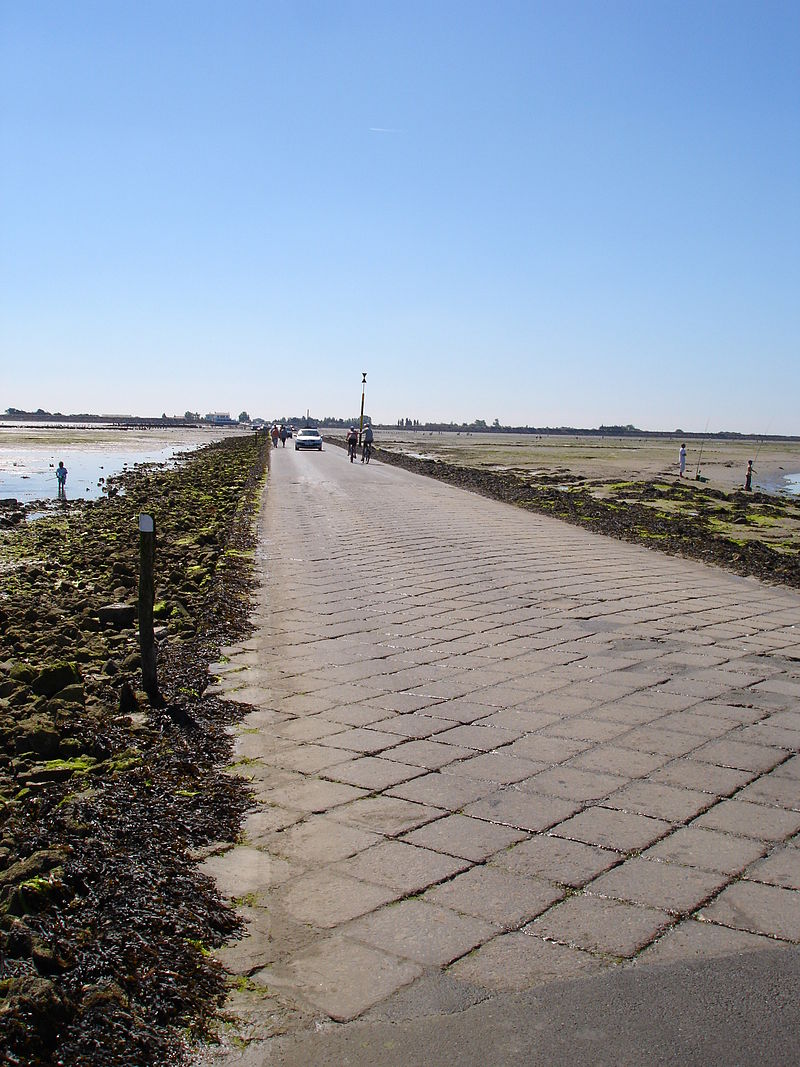 Noirmoutier was the location of the first recorded Viking raid on continental Europe, when raiders attacked the monastery of Saint Philibert of Jumièges in 799

Pesky Vikings. Were they salt traders as well? Or perhaps the Saxons were Vikings and the Vikings Saxons?

The Venetian merchant and explorer of West Africa, Alvise Ca da Mosto, describes an interesting method of bartering salt for gold on the Niger in the 15th century. Salt was carried from the Sahara by people he describes as Negroes – probably slaves of the Tuaregs or Arabs – and then left in piles on the river bank. The salt-trading Tuareg or whoever they might exactly have been (shall we call them African Saxons? ;) ) then retreated "a half day's travel" while another tribe arrived on large boats from further south. These people left what they considered a fair amount of gold by each pile of salt, and then they too left. The salt traders returned and either took the pile of gold next to a particular pile of salt or left it. The gold traders returned, took the piles of salt for which the gold had been taken and either added more gold to the other piles, or took the gold and left the salt if they were not prepared to pay more. In this way neither party spoke to the other or even had to see each other.

I take it no third party freelancers came along to help themselves?

Also it means you won't be captured if the salt-traders turn out to be slave-traders.

I expect it was precisely their reputation as slave traders that kept third parties out!

In contrast to what is mentioned in every schoolbook worldwide, English never was imported into Britain by the Anglo-Saxons. Official history is simple. It goes like this:
after the fall of the Roman Empire the Anglo-Saxons, who were initially hired as mercenaries by the Britons to protect them against marauding Picts and Scots, eventually took over Britain and imposed their Germanic language on the defenceless inhabitants.

What is stunning is that this story lacks any form of evidence. For instance, no contemporary writer mentions a language transition in Britain; not on the Continent, nor in Britain itself.

It's only a two-page article. Surely a subject worthy of a book?

"Actually, English has more words from Australian
Aboriginals than from its supposed own Celtic origin. "
It's a lovely day, I'm going for a walk on the Downs.