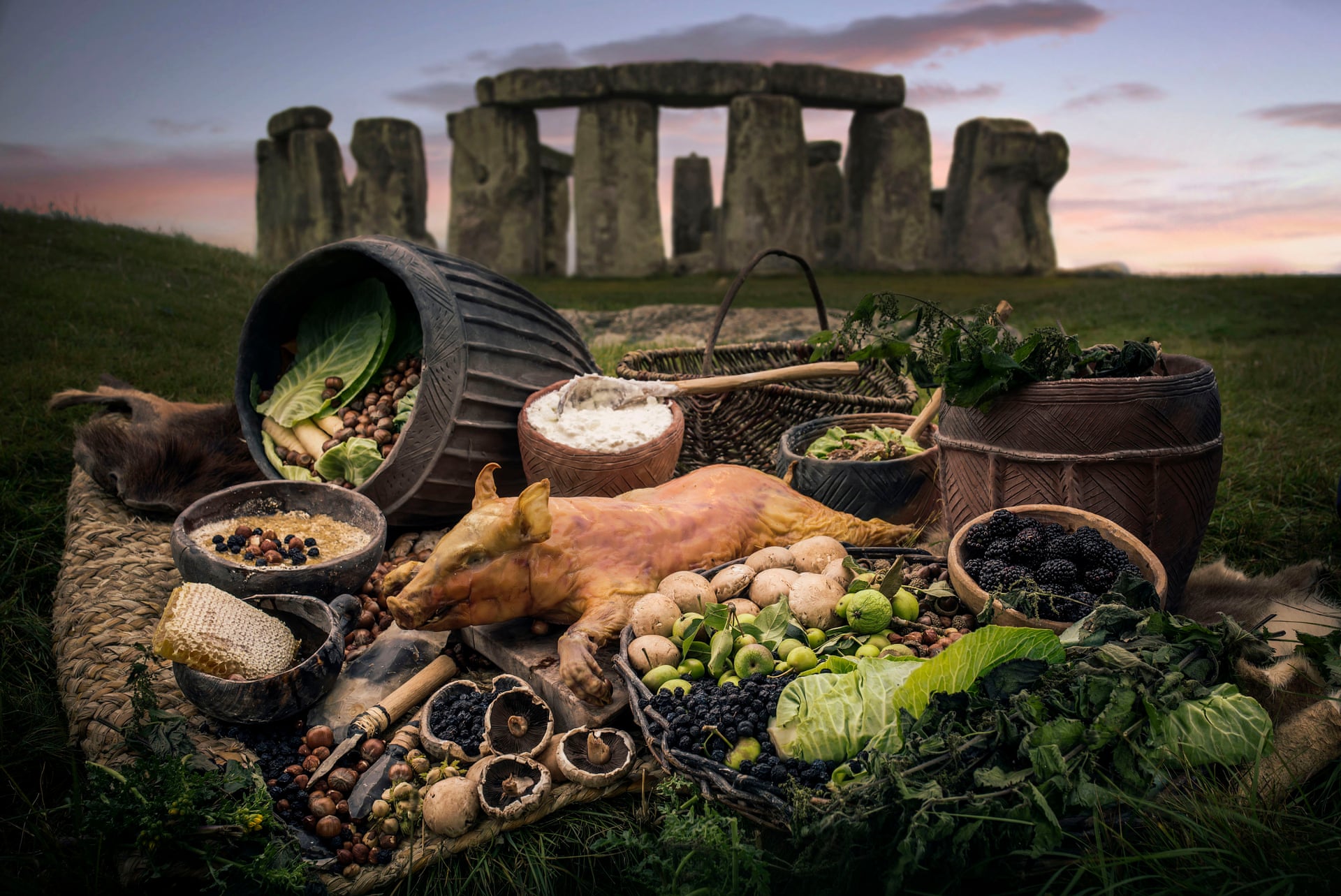 Forget the bluestones. A good army marches on its stomach and if gentlemen from west Wales can steal a leg of beef perhaps their interest in Stonehenge could have nothing to do with stones, blue or otherwise. I'm allowed to say that having Welsh antecedents myself and roast beef and Yorkshire pudding was certainly a family favourite while listening to Family Favourites.

My culinery theory is that Stonehenge was the Smithfield of the time. They both start with the letter 'S' so that proves it. 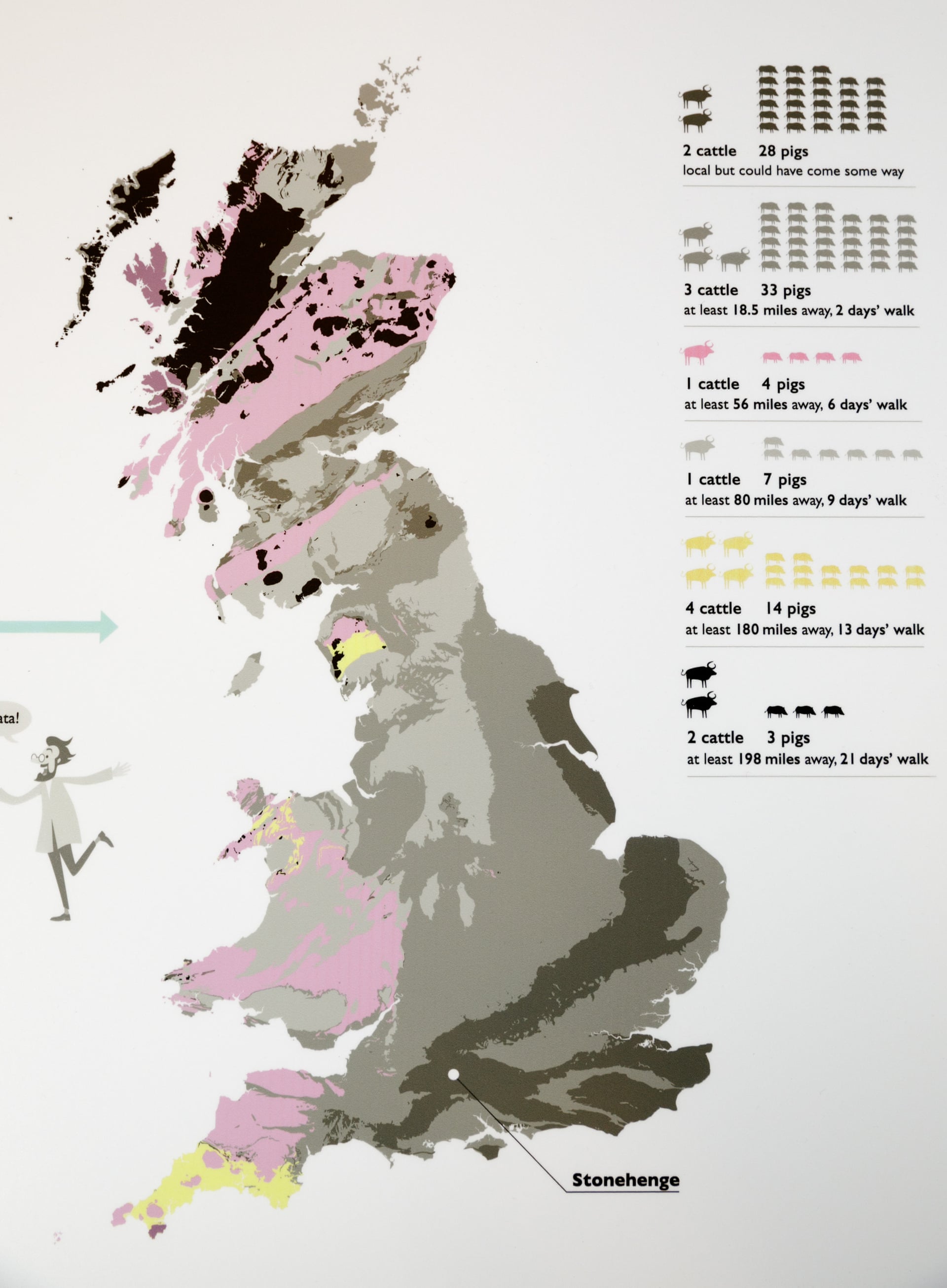 Did they walk all the animals down there or did they sail them down in ships. If Langdon is correct about water levels that would be the sensible thing to do even if later drovers walked their animals down to London.

More strontium. Looks like they were trading strontium as well. And strontium does originate in Strontian in Scotland. Perhaps they were making a bomb of some sort?

Strontian was established in 1724 to provide accommodation for lead miners working in the galena ore mines. The mines reached their peak in 1730, when they employed 600 men extracting silver, lead and zinc, but then went into decline.

In 1790, however, the lead mines were the cause of Strontian's unique claim to fame. French prisoners of war, who were working the mines to provide shot to assist the British war effort against France, found something else. This turned out the be a completely new element, later names Strontium after the village. The lead mines continued to be worked intermittently during the 1800s and first half of the 1900s. The last mining in the area, by this time extracting barite for use in the North Sea oilfields, took place in the 1980s.

Or did the blue stones come down by glacier? No doubt steered by ancient Welsh stone masons.

hvered wrote: Interesting that an academic has attacked the bluestones theory but it'll upset the archaeo-astrologists just as much. One of the Stonehenge hypotheses is a Pythagoras triangle linking Stonehenge, Preseli and Lundy proposed by Robin Heath and John Michell.

One wonders though, if H.H. Thomas had come up with a different bluestones location, would a similar triangle have been traced, on the basis that you find 'sacred geometry' when you look for it?

Sadly I agree; Robin Heath especially has done great work on Metrology, but that particular triangle was a bit of a punt. There are more and better triangles to be drawn just using places like Avebury, Stonehenge, Glastonbury etc.

It looks like some of the geo-academic people have decided they've had enough, and are starting to put the academic boot into the latest Stonehenge-from-Wales speculation.

This is an "alternative version" of the OU press release which has caused such a lot of trouble in recent days. I was happy to share it with Andy, over on the Megalithic Portal. I have cut out the hype and concentrated on the key findings of the research. It is actually rather interesting, but it reminds me of the early days of amino acid dating and 36C dating, when correction factors and contamination sources were still being worked out, and when some rather outrageous claims were being made about accuracy and significance.........

This is a version which extracts all the key evidence and findings from the scientific study:

Will the Landlords sniff at it because it's Welsh?

The potential length of the Hindwell cursus appears to place it amongst the largest in Britain, along with sites such as the Dorset Cursus (the associated Gussage and Pentridge cursuses), the greater Stonehenge cursus, in Wiltshire, the Stanwell cursus, in Middlesex, and the Rudston A and D cursuses, in East Yorkshire

The evidence now suggests that the cursus could have a total length of 4.66km

At Hindwell there was the largest palisaded site yet found in Britain. It was an oval shape 800 by 400m, enclosing 34 ha (Maiden Castle is only 17.2ha), with a circumference of 2.3km. If you look at the map, that incorporates the lake, the farm, the Roman fort, the barrows - it's huge. I think the 'kink' in the road to the North is on its outline. Pottery in its ditch has been dated to 2700BCE.

Think about how much work was involved to make this - there were post holes dug, 3 in every 5 metres. They were all 2 metres deep, and held oak posts about 70 cm in diameter (and therefore weighing about 4 tonnes each). Using the ratio 1:3 for below:above ground (I don't know where the authors got this from, but supposing we go with it..) this means the posts were all 6m tall! and there were 1400 of them around the enclosure. They'd been charred before putting in the ground - for waterproofing?

Neolithic systems of ditches, embankments and - sometimes - palisade structures represent the majority of the European causewayed enclosures. Enclosures consisting purely of palisades are quite an exception up to now, especially, if they are as monumental as the Hindwell site in Wales. What might well be interpreted as a single-ditch system from the air, turns out to be a "megadendric" structure of impressive dimensions, dating to the Later Neolithic.

A Scottish Silbury and Woodhenge.

For a long time Droughduil Mote was thought to be the earth mound of a 12th-century castle. However, excavation has now shown that it was built at the same time as the nearby prehistoric monument.

The fields between the mound and Dunragit village contain one of the most important Stone Age sites in Scotland. Nothing can now be seen above ground but recent aerial photography and archaeological excavation has revealed the remains of three massive concentric timber circles; the outer circle was 300m in diameter, almost six times the size of Stonehenge.

Shropshire church found to be UK’s oldest sacred site still in use.

The church, known as the Church of the Holy Fathers, now belongs to the Greek Orthodox Church which bought it for the nominal sum of £50 from the Church of England in 1994 and saved it from dereliction. It was previously called St John the Baptist and dedicated to St Milburga in pre-Reformation times. It stands on the edge of a housing development site in Sutton on the edge of Shrewsbury in Shropshire. Carbon dating of a wooden post, which extracted from the dig in February, has shown it was first placed in the ground in 2033 BC – a time when the ancient Egyptians were still building Pyramids. Archaeologists expected the post to turn out to be Anglo-Saxon, so were shocked to discover it dated from the late Neolithic/early Bronze Age period instead. ... archaeologists discovered burial mounds and cremations, slots for standing stones and two rows of Neolithic post holes and a ditch, known as a cursus, which they interpreted as processional walkway. It was aligned east to west, extending towards the current late 12th/early 13th century church.

Here we have the archeo's performing their ritual devotions and prayers on hands and knees as they pay homage.

So another Anglo-Saxon church bites the dust. "I'll 'ave french fries with me Milburga." I don't suppose there's any point in telling all involved that they haven't actually found

the UK’s oldest sacred site still in use

just yet. The only diagnostic features are the "burial mounds and cremations" about which we await developments.

Brief Description: A chapel, first mentioned in 1278, which is protected by Grade II* Listing. Contains 14th century wall paintings, including a depiction of the martyrdom of Thomas a Becket. Now operating as Church of the Holy Fathers of Nicea.

That suggests the church has been assessed quite rigorously and indeed there have been a fair few 'interventions' over the last twenty or so years. Excavations, test pits, you name it

The former parish church of St. John has 12th or early-13th century origins and possibly replaced an earlier, timber, structure.

This has to be said because the orthodox explanation for the absence of Dark Age churches is they were subsumed into later buildings. It may take the purchase of a church by the Greek Orthodox Church to do a proper analysis, an unusual occurrence in both cases.

Makes one wonder about the extent or depth of archaeological interventions.

A few days ago, someone put up a YouTube of an interview I gave at the Glastonbury Conference where I launched the great Cormorant Theory. https://www.youtube.com/watch?v=9V7Ebnor7fE

Watching it now, I thought it was pretty good (though I look pretty awful, I was much older then) but the comments are all but unanimously hostile. This is odd because the original lecture https://www.youtube.com/watch?v=IJ_S6zkh_PY was on the whole favourably reviewed. It seems that this lot (which lot? how do people get to hear of these things? there are already a thousand of them) are much put out by my not genuflecting with sufficient reverence at the Great Whited Sepulchre of Stonehenge.

The criticism, such as it is, seems to run along the lines of we don't know what megaliths are therefore he doesn't.

You have a theory and that's put down as arrogance. There's no real criticism.

It's when someone puts forward an alternative theory that looks viable that you'll have to worry.

It's funny you should say that. The megalithic stone circles are clearly a system and a system must have a purpose. And yet, as far as I am aware, nobody (neither academics nor crazies) has ever put forward a theory as to what that system is. It is all very well saying things like "they're for ritual purposes" but even that requires a system. Churches are for ritual purposes but if you find them duplicated all over the British Isles they must form a system. In their case, Christianity.

If they guessed that churches were for ritual purposes they would immediately be able to say, or at least speculate,"Well, there are rows of seats all facing the same way so that suggests..." or "They are often accompanied by graveyards so that suggests..." and so on. The fact that they can't do any such thing with stone circles -- especially as some tiny slabs in a field have to be explained systematically with Avebury -- should at least prompt them to say, "Doesn't look like 'ritual purposes' then."

It goes without saying that the one theory that does purport to explain the circles systematically is apparently not worth acknowledging, never mind refuting.