At last, somebody taking these matters a little bit seriously.

I don't know how long you've been with them but ten years ago they were giving me a hard time. Nice to hear they're still going.

Basically, everyone who speaks Chinese can read Mandarin

Do they have any choice? Are any of the other Chinese languages (not Uighar, Tibetan et al) written down? Or does it not matter anyway if everyone is using the same ideograms?

; but according to whether they speak Mandarin, Cantonese or another Chinese dialect/language,

they will mean something different to speakers of other variants of Chinese.

But not ironically, in theory at least, to Japanese speakers insofar as they use the same ideograms. Or have I got this wrong?

The languages of South India are totally unrelated to Hindi.

Perhaps you could say what the relationship between Urdu and Hindi is. I have always assumed the differences were more political than actual but both sides deny it!

I used to work with a bloke whose mother tongue was Urdu. He described it as "This funny language which sounds like Hindi and looks like Arabic." That's what it is AFAIK; Hindi written in Arabic (or actually Farsi, which is very slightly different) script. Obviously there will be some other differences, just as there are between eg European and Canadian French.

I don't know how long you've been with them but ten years ago they were giving me a hard time. Nice to hear they're still going.

Somehow this doesn't surprise me! But what were they giving you a hard time about?

This page will give you the gist

One can easily tell that Mick has got them seriously rattled.

No serious attempt to play the ball, just a series of attempts to hack the player down with Ad Hominem attacks.

What do you see as ad hominem on that page? To me it all looks ad librem, to coin a phrase. It might be worth looking for this book, presumably under the title The History of Britain Revealed, though the American title actually sounds more interesting. But presumably it is the same book.

They are indeed the same book. It is available for a penny here
https://www.amazon.co.uk/The-History-Br ... im_sbs_b_1
but worth getting at twice the price.

Bmblbzzz wrote:What do you see as ad hominem on that page? To me it all looks ad librem, to coin a phrase.

I might have exaggerated a bit. It was their style rather than their words. Them wondering who on earth this Harper character is, and where does he live?

Plus them not actually engaging with the content. "Not invented here" syndrome?

Leicester keeps on digging up bones. This time the Beeb has got in on the act pretty sharpish for obvious reasons.

Our ancestors were African so it must be that English is a dialect of Xhosa or summat like that.

Skeletons found in Leicester could be the earliest examples of African people living in the famously diverse city.

The University of Leicester found 83 skeletons in a Roman graveyard dating back as early as the 2nd Century.

Six with possible African ancestry is the first evidence of migrants from the continent in the city, experts said.

Leicester is one of the UK's most diverse cities, with half its population described as white British compared to 80% nationally.

Matthew Morris the project supervisor goes on to say that multiculturalism was not confined to recent decades. Well, who'd have thunk. Perhaps his name is an indication of his own Moorish origins, no wonder he is excited. But he is a bit mystified as to what they were doing there. Apart from being dead and buried.

He said there are a number of theories why they were in Leicester including for trade or military reasons.

I wonder if he's heard of the Roman invasion and what they did for us?

The beeb helpfully show a picture of an archaeologist. 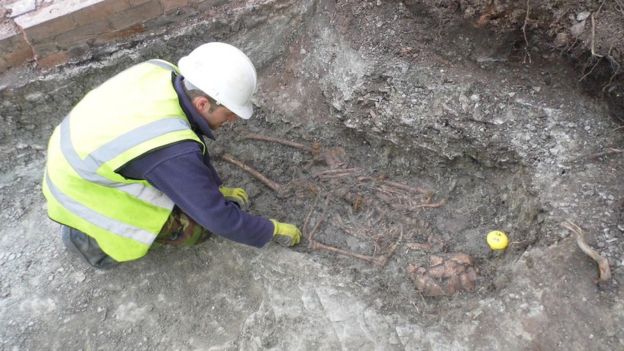 Which is very helpful.

'For trade' avoids wondering whether they were trading or being traded. Obvs.