hvered wrote:Funnily enough there was a Coast programme last night with a section on Guernsey privateers who benefited greatly from the Napoleonic War. Presumably the Braye was filled in to prevent French ships getting through but why was such a useful waterway not reopened after 1815?

Maybe the Vale had become more valuable as dry land?

I'm sure you're right. The Guernsey folklore site you mention says the bridge, called Pont St Michael, was quite a scary crossing.

" Pont St. Michel," was held in especial dread. At night the " feu bellenger" or will-o'-thewisp, was to be seen dancing on the sands, and gliding under the bridge, and even at mid-day, when the sun was shining brightly, unearthly cries of distress would be occasionally heard proceeding from that direction, though no living being could be discovered.

The connecting bridge was probably a toll-point which would add to its unpopularity.

Is bellenger another 'Bel' word?

I'm sure you're right. Will o' the wisps or feu bellenger are associated with piskies in the West Country who would lead travellers into bogs if no reward were offered for their assistance.

Which reminds me, the other day I looked up St Hermes about whom "very little is known" but something called St Hermes' Fire is apparently often confused with St Elmo's Fire.

Just looked up St Elmo's Fire on Wiki which says

St. Elmo's fire (also St. Elmo's light[1][2]) is a weather phenomenon in which luminous plasma is created by a coronal discharge from a sharp or pointed object in a strong electric field in the atmosphere (such as those generated by thunderstorms or created by a volcanic eruption).

Elmo is Erme [by the L = R rule] in fact he is also called St Erasmus according to Wiki:

St. Elmo's fire is named after St. Erasmus of Formiae (also called St. Elmo, one of the two Italian names for St. Erasmus, the other being St. Erasmo), the patron saint of sailors. The phenomenon sometimes appeared on ships at sea during thunderstorms and was regarded by sailors with religious awe for its glowing ball of light, accounting for the name.[3] Because it is a sign of electricity in the air and interferes with compass readings,[citation needed] some sailors may have regarded it as an omen of bad luck and stormy weather. Other references indicate that sailors may have actually considered St. Elmo's fire as a good omen (as in, a sign of the presence of their guardian saint).

Talking of piskies, there's a bathing pool apparently known as Piskey's Pool in Plymouth Sound. In fact there are several pools which is reassuring since we consider Plymouth to have been an industrial centre. The main bathing area is Tinside.

There is also an area called The Bridge.

It seems to separate, or connect?, Ravenness Point and St Nicholas's aka Drake's Island.

There's a tidal anchorage called Barn Pool. Perhaps 'burn pool'. What strikes me is how complicated it is to steer between the various obstacles aggravated by the tidal range even in the middle of a major harbour.

Barn Pool is overlooked by Mount Edgcumbe, now a park, which seems to have been used since at least the Bronze Age (barrow on highest point) as a look-out and/or landmark not only for the Channel but also inland.

The pool is unexpectedly deep and considered an excellent anchorage that, according to yachtspeople, is big enough for about three boats. You have to watch out for the tide as the boat(s) can get stranded at low tide. It may be a former Venus Pool

The situation is strangely similar to the tidal pool at Chapel Island at the southern end of Strangford Lough at the entrance to the Narrows. The tidal pool here is also highlighted as an anchorage with the same proviso re tides and stranding. The strategic location at Chapel Island also affords panoramic views. There are loads of islands in Strangford Lough, some with causeways to enable access, but this tidal anchorage seems unique, which raises the possibility it was purpose-built.

Plymouth folklore is that The Bridge did used to be a bridge, or tidal causeway, to St Nicholas' Island.

The Barn Pool has been a favoured anchorage for sheltering from the prevailing SW winds for centuries.
e.g. Charles Darwin and The Beagle in Plymouth

Over the other side of Plymouth Sound, at Plymouth Yacht Haven, the owners have kindly donated space in a full-size shipping container for a delightfully dotty deepwater diver - Ray Ives - and his collection of artifacts from sixty years of diving.

Only six days ago, Ray kindly gave us a guided tour. The oldest item he has found is an intact Roman vase, which he found while diving at Cremyll, just north of Barn Pool. He has it on display at Plymouth Yacht Haven, which is very close to Mount Batten, where Barry Cunliffe did the field work that found Phoenician graves.

The Cremyll ferry still runs, taking people across the border from Devon to Cornwall and back.
Last edited by Boreades on 2:20 pm, edited 1 time in total.

Portsmouth Harbour repays another look. Portsmouth is on Portsea Island, connected to the mainland by a short bridge.

The western side of Portsea Island is connected to Whale Island also by a bridge though before the modern bridge there was a fordable causeway at low tide as can be seen in this postcard dated 1906.

Apparently both were used, the bridge one way and the causeway for traffic from the opposite direction. The shape is quite extraordinary to my eye, probably not natural.

The harbour was unsurprisingly heavily fortified. A tower called James Fort was built on Burrow Island at the neck of the main harbour

As per the above map of 1668 from this site http://www.fortified-places.com/gosport/, it is clear that Burrow Island was firmly attached to the mainland. This is a more general map of the layout, dated 1678, which shows Burrow Island had the same strangely curved 'tail' (quay?) as Whale Island.

The tail shape might be why Burrow Island is also called Rat Island. A sailor's pigtail is often called a rat (and, pleasingly apt, spelt backwards it's tar!) though it may be that the island with its fort was seen as the first defence of Portsmouth's dockyards and rats famously are said to be the first to leave sinking ships.

Re "The shape is quite extraordinary to my eye, probably not natural."

Well, the next time you are passing by an aquarium (like the big one in Plymouth), pop in and look at the Sea Horses. Weirdly cute little things, natural as far as I know, and reminiscent of that shape.

That's interesting because another island in Portsmouth harbour is Horsea. It was once two islands and connected to the mainland by a ford, now out of bounds for security reasons as the site of one of the Navy's wireless stations and an underwater diving training centre. The MoD often end up in prime Megalithic locations. There's also a Horsey Island at Kirby le Soken, an area of salt marshes on the Essex coast, which is a tidal causewayed island. 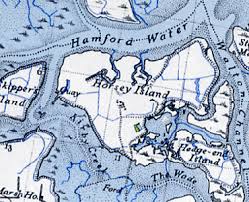 Horsey has a near neighbour called Pewit Island which is odd as there's also a Pewit Island in Portsmouth Harbour which according to Wiki used to be connected to the mainland by a manmade shingle causeway.

Further south off Mersea Island in the River Colne estuary is another Pewit Island. Pewit is usually defined as a lapwing but seems to also refer to a range of sea birds, including the black-headed gull pewit which comes under the heading of sea-crow