My current favourite re-enactors of megalithic shipping and trade routes have been in touch. With what (I'm sorry to say) would sound to Metropolitan Amazon Prime customers like a piss-poor excuse for not delivering on time.

With frustration and sadness, we must announce that Bessie Ellen cannot make the voyage to Bristol this weekend. With ripped sails and a damaged stern from a rough home journey across the Biscay, the final leg is sadly no longer an option for the captain and her crew. The ship will stay in Fowey, Cornwall where it will be taken out of the water for repairs tomorrow.This comes as a great blow to all who have put so much time and effort into making this voyage possible. BUT the cargo has made it to our shores! For those of you in Bristol it will be ready for collection as planned this weekend at the Picklebristol, Underfall Boatyard . There will be music, tastings and talks to enjoy, and all of you who have pre-ordered can still collect from us there. And it will be ready for bike courier delivery in Brighton next week and following that collection from our brighton office. We will be in touch with those who have ordered early next week with details.


M'Lady Boreades didn't get where she is today without experiencing the joys of sailing that part of the world in late October. She (and TME regulars) might wonder WTF were they doing, or why they insisted on trying to sail across Biscay or round Lands End and up the Bristol Channel in late October instead of aiming straight for safer ports like Falmouth and Fowey in the first place. But hey that's the politically-correct theatre of sustainable transport (via Bristol and Brighton).

TME pedants can rest assured that M'Lady Boreades has already spotted the typo in their press release. There is no shipyard in Fowey that can take ocean-going boats out the water, the ones that can are in Polruan, on the other side of the river.

Meanwhile, M'Lady Boreades and I have been busy with our own research into megalithic shipping and trade routes, with an all-expenses paid trip to A Coruña, and the local legends.

A Coruña spread from the peninsula where the Tower of Hercules stands, onto the mainland. The oldest part, known popularly in Galician as Cidade Vella (Old City), Cidade Alta (High City) or the Cidade (City), is built on an ancient Celtic castro. It was supposedly inhabited by the Brigantes and Artabrians, the Celtic tribes of the area. The Romans came to the region in the 2nd century BC, and the colonisers made the most of the strategic position and soon the city became quite important in maritime trade. In 62 BC Julius Caesar came to the city (known at the time as Brigantium) in pursuit of the metal trade, establishing commerce with what are now France, England and Portugal.

The Tower of Hercules is a mightily impressive erection. As is King Broegan.

Breogán (also spelt Breoghan, Bregon or Breachdan) is a character in the Lebor Gabála Érenn, a medieval Christian history of Ireland and the Irish (or Gaels). He is supposedly the son of Brath, and is described as an ancestor of the Gaels. The Lebor Gabála purports to be an account of how the Gaels descend from Adam through the sons of Noah and how they came to Ireland.

Until the 20th century, the tower itself was known as the "Farum Brigantium". The Latin word farum is derived from the Greek pharos for the Lighthouse of Alexandria. 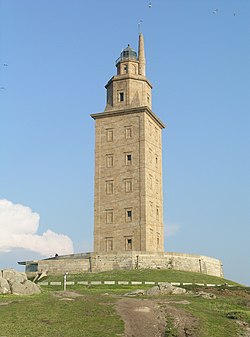 Picklebristol. Did they make that up or is it more of a local description? Did you find any Megalithic infrastructure? I am surprised to hear of such intense Roman maritime interest in these parts since such activity seems remarkably sparse in Classical accounts. Where, for instance, does the Caesar reference come from?

Mick Harper wrote:Where, for instance, does the Caesar reference come from?

If you want to complain to Wikipedia, feel free.

Don't be ridiculous. Wiki didn't even exist in Caesar's time.

Here's something I found earlier in the local museum:

A selection of materials from different hillfort -fortified villages of the province, such as torcs and earrings made of gold and bronze, ritual axes, antenna swords, altars, agricultural tools, metallurgical tods, ceramic, mills, fibulae and others elements, let us come a little closer to life in the Iron Age, before the conquest of Rome.

There is a second room dedicated to the the Elvina's Hillfort, comprising at least the period least between 3"century BCE and 9AC, open to visitors and also dedicated to the materials found in the excavations developed by this Museum, among which we can emphasize the outstanding Treasure of Elvina.

Elvina even has its own Trip Advisor reviews. Although some reviewers appear to be complaining about the state of the facilities?

I am gradually learning to distrust things like torcs and earrings. Generally I accept the probity (if not the intelligence) of present day British archaeologists, though not necessarily their immediate forebears. And not at all going back further than that. What the position is in Spain, ancient or modern, is something that you (better still Hatty who is Spanish on her parents' side) might care to investigate.

That the tower itself was known as the "Farum Brigantium" deserves more attention.

Was it because there were Brigantia people?

The ancient name of Bragança in Trás-os-Montes, Portugal, was Brigantia. The inhabitants today are still called brigantinos. Braga is another town in Portugal. It is the capital of the district of the same name in the province of Minho. A short distance up the coast, the cities of A Coruña and Betanzos in present-day Galicia (which together with the area of present-day Portugal north of the Douro river formed the Roman and later medieval kingdom of Gallaecia or Callaecia) were respectively named Brigantia and Brigantium. According to the Lebor Gabála Érenn (The Book of the Taking of Ireland) Breogán found the city called Brigantia, and built a tower there from the top of which his son Íth glimpses Ireland and then sets sail across the Celtic Sea to invade and settle it.

Are these related to the Brigantii in the Alps?

The Brigantii migrate into the Cispadane Gaul region of the Alps, arriving in an area that has already been settled for a millennium. Strabo later states that they are a sub-tribe of the Vindelici, who occupy territory to the north-east. This could indicate the route taken by the Brigantii to reach their new home, but it also raises the possibility that they are not Gauls, or perhaps only partially so. The Vindelici have an uncertain ancestry, possibly being a blend of Celts and Liburnians, making it possible that the Brigantii are Liburnians commanded by a Gaulish elite. Even referring to the Brigantii as Celts is merely the modern naming convention that has been inherited from the Romans. Thinking of the term as valid or invalid may be irrelevant. 'Celt' may simply be what some West Indo-European speakers call themselves and others not - and with the Celts long in the ascendance in central Europe, some non-Celtic people may arbitrarily adopt the term in order to fit in.

Or are they related to the British Brigantes?

The powerful Celtic Brigantes counted as their territory all of the north of England except Humberside. They seem in fact to have been a collection of amalgamated tribes that took their name from the Celtic goddess Brigantia (as did the Brigantii tribe in the Alps and the Brigantes of Ireland). The Brigantes had few hill forts and their settlements were mostly in the form of small hill crofts. They were neighboured to the east by the Parisi, to the south by the Corieltavi and Cornovii, and to the north by the Novantae, Selgovae, and Votadini.

Mick Harper wrote:I am gradually learning to distrust things like torcs and earrings.

Why?
Was it the disappointing provenance of the torcs and earrings you bought in Notting Hill Market?
Or Peckham High Street along with the genuine reproduction Harrison Chronometer?

Mick Harper wrote: What the position is in Spain, ancient or modern, is something that you (better still Hatty who is Spanish on her parents' side) might care to investigate.

Here's wot I have learned so far:

It depends what part of Spain you're talking about. Some parts are taking care, but not necessarily to the extent that we're used to with English Heritage who can lay a cold dead hand of delay and cost on any land development that turns up even an old bent nail or coin. Other parts are taking care to bulldoze old rubbish and shattered relics into the foundations of new but unfinished developments that then become ghost towns. There's also more of a political dimension in areas like Galicia, Asuria, Basque and Catalonia that don't care to be called Spanish. If it's evidence of an era of autonomy from Spain, it might get taken care of. Otherwise it's more landfill.

I would love to go again and investigate some more. Unfortunately my Financial Director has closed the budget for Research Trips for 2018. You might care to get a cheap flight from Luton Airport and do some investigation yourself?