Boreades wrote: So - megalithic stone movers would need seriously big strong boats. What we need is some evidence that people in the Quiberon area were producing big cargo vessels that could handle large volumes. The blessed TA's will object at this point, saying there is no record from these megalithic people of how they could have done this. I'm glad to say Oh yes there is. For that, we need to turn to none other than Julius Caesar. See his account in his Gallic Wars, Volume Three, in which he describes the Veneti defending their homeland from the invading Roman Navy.

Was the Roman navy unique? Can't help wondering if these big strong boats were organised into convoys, a sort of caravanserai equivalent on sea. History books generally tell us that the English navy was founded by Henry VIII which seems surprisingly late.

I'm not sure if Henry founded the navy, some people credit Philip II of Spain with this feat even though he wasn't in attendance much by all accounts. However Henry did establish Trinity House whose remit is still to maintain lighthouses, buoys etc. and supervise all navigation around the British Isles.

The governing body goes by the name of Elder Brethren and there is a suspiciously Catholic aura about this outfit, dedicated to the Holy Trinity and of course St Clement, patron saint of sailors.

Henry founded a navy. Alfred the Great is also accredited with founding a navy.

But all had small ships and small fleets in comparison to the Veneti. What they've got in common is notable events when National Navies were established at taxpayers expense.

hvered wrote: The governing body goes by the name of Elder Brethren and there is a suspiciously Catholic aura about this outfit, dedicated to the Holy Trinity and of course St Clement, patron saint of sailors.

Maybe so but St Clement is one of those ambivalent characters associated with shipping and trade in a manner more reminiscent of Hermes and navigational and intellectual 'saints'. So for instance St Clement of Ireland is popularly said to have founded the University of Paris on the Ile de France, in spirit at least. [The university has three listed patron saints -- Catherine of Alexandria, Nicholas and Ursula.]

St Clements Bay in Jersey which has a particularly high tidal range has a tidal island, La Motte or Green Island, with evidence of Neolithic settlement. Sailors are renowned for being superstitious but it seems that landlubbers are more so, at least concerning ancient remains. Only a few years ago, the bull of St Clement, a new legend in the modern bestiary, appeared:

People were so scared of this bull that they refused to venture down to the beach, even to go fishing.

One fisherman refused to believe the tale about the bull, and decided to search the rocks. Whilst he was searching, the bull began to roar - but when the fisherman followed the sound, he found a rock pool, where the rocks had been eroded to form a pipe.

At low tide water was sucked down the pipe, making a gurgling noise, which echoed loudly off all the rocks. The fishermen filled up the rock pipe - and that was the end of the bull of St. Clement.

It looks like a causeway leads to the island but it's hard to tell if this is an ancient or modern structure. Has anyone been here?

Jools wrote: Salcombe is a good example of a medieval port (established thirteenth century) at the mouth of an estuary clogged up further inland. There are silted-up creeks and streams that used to be navigable but the estuary or ria is notoriously hazardous on account of a sandbar only exposed at low spring tides.

This is remarkably similar to the Bronze Age boats -- six! -- dug up in the drained waterway of Whittlesey, or Witesie, in East Anglia. They were so far down below peat layers that the boats, fish/eel traps and bronze artefacts would never have been detected were it not for recent quarrying, to get at the Oxford clay.

Fenland silted up channels are called roddons and serve as paths or causeways. Archaeologists used to think there were Roman roads here and indeed supposed that Whittlesey was a Roman trading post, before all the Bronze Age finds. Whittlesey is a market town surrounded north and south by the River Nene and on a branch of the river, presumably a manmade canal as it headed straight for the coast and the East Anglian ports.

Interesting feature re Bronze Age boats, which understandably enough can tend to sag a bit, is the use of a 'hogging rope' to find the central line which applies to boat construction as well as reconstruction. Ancient Egyptian boats were apparently reinforced by a thick rope running from one end to the other.

Yet more rigidity was provided by a 'hogging-truss', a thick rope that ran above the deck, from the bow to the stern. The hogging-trusses could be tightened as necessary and helped to prevent the bows and sterns of the ships from sagging.

Hogging means sagging or bulging, the procedure hasn't changed one iota it seems

You place a centre line using a piece of rope. By using a perpendicular line in the forward and aft part of the boat you can check whether the boat has twisted. This piece of rope is called a 'plumb line'. You use the centre line to be able to determine the angles of the frames and the hull. It is handy to leave the plumb line in place during the restoration in order to keep checking for twisting.

The technique is also reminiscent of a surveyor's post-and-string.

Hogging rope is also used by herders. One end is looped round the animal's horns and fastened to a foreleg, pulling the leg straight down from the body and lowering the head. Horses too are tied by the foreleg using a hogging rope, the other end attached to the tail.

It might be there's a straight line connecting the two forms of transport, on land using draught animals and on sea with ships.

The Hog's Back is the name given to a ridge, a noticeably high and straight part of the main road connecting Portsmouth and London.

Hogue crops up in the Channel Islands and northern France as in La Hogue Bie in Jersey and the island of Lihou (= Le Hou) in Guernsey. Lihou is, like La Motte, a tidal island and connected to the mainland by a causeway built by monks.

The monks seem to have had a certain notoriety lasting until at least the eighteenth century when a poem was written about monks and nuns on Lihou and their love-making antics at Midsummer. The poem may be why the island's rock pool is called the Venus Pool!
Last edited by Royston on 11:23 am, edited 1 time in total.

From the Department of "Doh! What A Surprise (Not)" comes news that seems to astonish some orthodox folks. One per cent of Scots are said to have DNA in common with people from North Africa. Is it a surprise to this domain and anyone who's studied the Atlantic Bronze Age, Carthaginian trading from Tartessos etc?

Royston wrote: Hogue crops up in the Channel Islands and northern France as in La Hogue Bie in Jersey and the island of Lihou (= Le Hou) in Guernsey. Lihou is, like La Motte, a tidal island and connected to the mainland by a causeway built by monks.

La Hogue Bie is an unnatural hill as can be seen in the photo, so naming Lihou 'the hogue' rather suggests it's a man-made island. 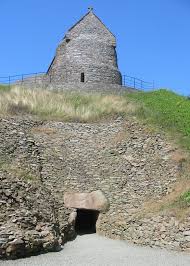 One of Jersey's most Megalithic legends centres on La Hogue Bie and relates how a dragon came up from Goose Green Marsh and laid waste to the area until a Norman seigneur called Lord Hambye accompanied by his squire, Francis, sailed to Jersey and killed it. He in turn was killed by the squire who married Lady Hambye claiming it was his late master's wish but he talked in his sleep so the truth was revealed to Lady H who had him killed. Hambye is near Mont St. Michel on the Cotentin peninsula. The chapel on top of La Hogue Bie mound is built over a dolmen or perhaps a collapsed menhir.

La Hogue Bie is constructed in such a way that the sun shines directly into the chamber at the spring and autumn equinoxes as is the case with other 'passage graves', Newgrange being the example most breathlessly cited. The lynchpin of the Channel Islands, Jersey, named its capital after St Helier which sounds like a sun-god or helios but according to Wiki, St Helier is rather unexpectedly conflated with St Marculf or Marcouf. This Marculf bloke is said to have died on May 1st, 588 AD and the Îles Saint-Marcouf off the east coast of the Cotentin Peninsula were named for him.

Strangely, he is credited with curing scrofula: His relics were transferred to the abbey of Corbény in Champagne, where they played a part in the coronation ceremonies of kings of France, crowned at Reims, and the tradition of laying on of hands.

Corbény monastery is usually spelt Corbie and is situated at the confluence of the Somme and the Corbie rivers in Picardy. The founding monks came from St Columbus's Luxeuil monastery in Burgundy and Corbie has an impressive reputation for learning especially hand-writing and manuscript production. It is at Corbie that the Carolingian miniscule style originated. The Corbie coat of arms has two keys facing opposite directions (Janus-like) and a crow.