I don't violently disagree with any of this. I too was struck by Pearson's foot. I haven't really kept up but I wasn't sure whether orthodoxy had accepted the idea of a Golden Metric Norm and was on the hunt for how long it was, how long it lasted and how long was its reach, or finds the whole idea risible given their general view of the long ago.

The discovery of a cursus monument site at Tormore on the Isle of Arran, which is more than a kilometre long, is helping to reshape Neolithic history in Scotland with such landmarks usually associated with the east coast.

You'll just have to be patient whle we get past the usual "high status elite ritual" stuff.

Cursus monuments were often defined by long lines of timber posts, forming a long rectangle, and were amongst the most spectacular features in the Neolithic landscape. The posts may have served as a procession route, perhaps to honour the dead.

"I think if you asked the survey team what they thought they were most likely to find on Arran, I would bet you no one would say a Neolithic cursus monument

I bet no one will not say that as they get LIDAR over more west coast causeways.

“There is no other on Arran, its unique on the island, there is one more in Kilmartin Glen and that is pretty much it for the western seaboard.

It's unique, apart from the other ones.

“What this example at Tormore tells is there are probably actually many more on them but because they were built from timber, you are not likely to see them in the unimproved peat landscape of the west coast

Until they get LIDAR over more west coast causeways. 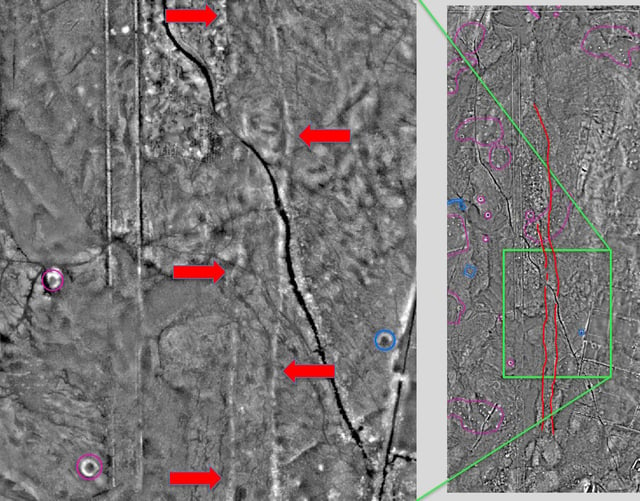 I was a bit miffed by this discovery when I read about it, to be honest. The theory put forward in Megalithic Empire is that cursuses are designed to intercept travellers who have missed their mark, returning them safely to their immediate destination. I couldn't imagine that the Isle of Arran would be large enough to require such (is it?). On the other hand this kind of cursus only needs to be a) reasonably long lasting and b) impossible not to stumble past, so a simple low, wide earthwork is sufficient. No wood is required. So these sound like 'not-cursuses' which since archaeologists supposed them to be Roman race-courses, hence the name, gives plenty of scope.

At first, I couldn't remember where Tormore is, and had to find it in this guide to the local geology.
https://geologyglasgow.org.uk/docs/017_ ... 480959.pdf

It was only then that I realised we've been very close to that area before (within one kilometre), with the Machrie Moor Standing Stones and stone circles.

Six stone circles are visible on the moor immediately east of the derelict Moss Farm.[1] Some circles are formed of granite boulders, while others are built of tall red sandstone pillars. The moor is covered with other prehistoric remains, including standing stones, burial cairns and cists. The stone circles are positioned over previous timber circles. A radiocarbon date of 2030 ± 180 BCE has been found for the timber circle at Machrie Moor . Several hut circles can also be seen as low rings of turf-covered stone.

Mick Harper wrote:The theory put forward in Megalithic Empire is that cursuses are designed to intercept travellers who have missed their mark, returning them safely to their immediate destination. I couldn't imagine that the Isle of Arran would be large enough to require such (is it?). .

How long's a piece of cursus string for travellers? I just plotted a run round the perimeter of Arran, it's 99.85Km. About 60 miles. I'm struggling, however, to find any navigational reason for the cursus being where it is, unless it's a route from Blackmoorfoot (on the coast) to the Machrie / Tormore area.

Just noticed that one place just south of Machrie is just called Ashlar.

What was the coastline of the Western Isles like 5,000 years ago?
e.g. Orkney

Orkney 10,000 years ago was a very different place. The islands comprised a single land mass and many of the lands settled by Orkney’s early inhabitants now lie underwater

Or was it anything like the Scilly Isle (singular) which didn't become plural isles until land dropped &/or sea levels rose, and that maybe post-Roman times.

If Arran was still joined to Kintyre and/or Bute (back then) that could profoundly change the landscape and the navigational options.

That part of Arran is important for one of Scotland's most enduring creation myths as well.

On the west coast of Arran, King’s Cave is where Sir Walter Scott said the 14th-century King Robert the Bruce encountered the struggling spider while he was defeated and on the run. It was that spider’s determination to spin its web that inspired Bruce to return to the mainland and defeat the English army.

Footnote for Tisi: To gain deeper insight, we may need to assist the local economy.
https://www.visitarran.com/what-to-see- ... -breweries