Let us not forget that the stealing of the Stone of Scone by Scottish students in 1950 gave birth to Scottish Nationalism. Spooky.

The SNP was formed a long time before the 1950s.

Anyway here's some more on the Egyptian standing stones. There are things buried beneath them and the whole area has been computer modelled to constellations and stars in around Four to Six thousand BC.

Have we mentioned Nabta Playa before?

Due south of Alexandria. Hmm... 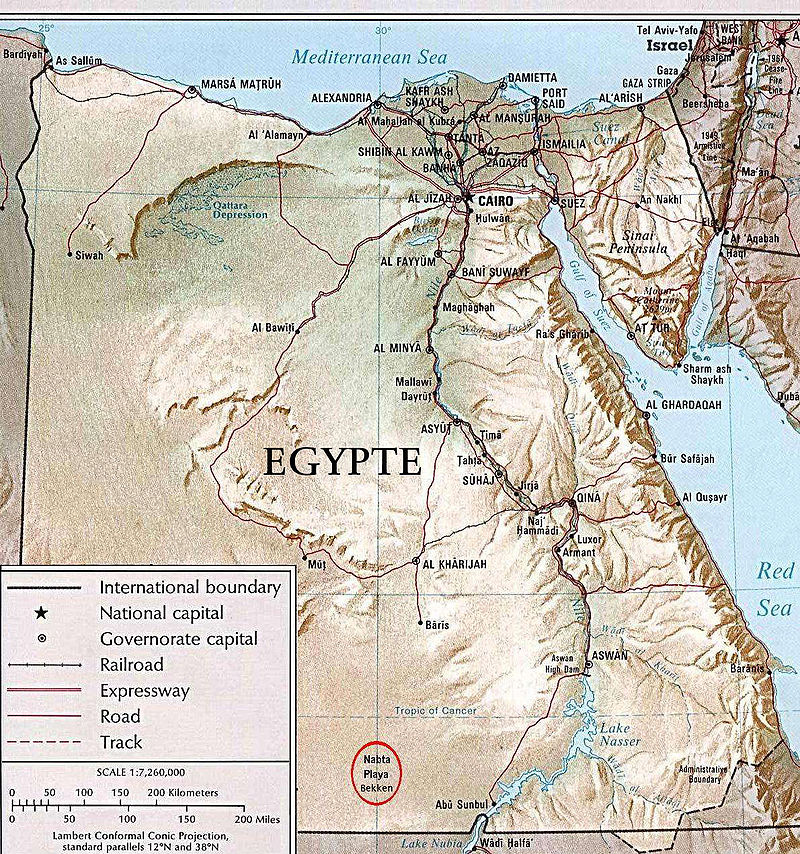 Yes, go back a page and there are a few links to the sand castle.

It's interesting that it's due south of Alexandria but it's also very close to the Tropic of Cancer.

Carretera 83 (Vía Corta) Zaragoza-Victoria, km 27+800. Of all crossings of the Tropic of Cancer with Mexican federal highways, this is the only place where the latitude is marked with precision and where the annual drift between the years 2005 and 2010 can be appreciated.

More linear than circular. I wonder where it was when this stone circle was built?

I can't make head or tail of this. Can anyone explain what it means?

The dominant methodology in archaeoastronomy is the statistical testing of regional groups of monuments. Such tests for the null hypothesis cannot be used for unique monuments like Stonehenge and Avebury monument complexes in England, nor do they raise inquiry to the level of the meaning of these or even regional groups of monuments. To interpret the collective representations of the ancient monument builders an additional method for archaeoastronomy is to treat monument design and landscape context as a terrain of choices and, together with skyscape, as coupled systems. Competing models of meaning can then be tested by theoretically sampling these domains.

For some strange reason, it reminds me of the Sokal affair

The Sokal affair, also called the Sokal hoax, was a scholarly publishing sting perpetrated by Alan Sokal, a physics professor at New York University and University College London. In 1996, Sokal submitted an article to Social Text, an academic journal of postmodern cultural studies. The submission was an experiment to test the journal's intellectual rigor and, specifically, to investigate whether "a leading North American journal of cultural studies—whose editorial collective includes such luminaries as Fredric Jameson and Andrew Ross—[would] publish an article liberally salted with nonsense if (a) it sounded good and (b) it flattered the editors' ideological preconceptions".

The article, "Transgressing the Boundaries: Towards a Transformative Hermeneutics of Quantum Gravity", was published in the Social Text spring/summer 1996 "Science Wars" issue. It proposed that quantum gravity is a social and linguistic construct. At that time, the journal did not practice academic peer review and it did not submit the article for outside expert review by a physicist. Three weeks after its publication in May 1996, Sokal revealed in Lingua Franca that the article was a hoax.

But surely that can't be the case here? The author appears to be a "serious academic".

Lionel Sims is Emeritus Head of Anthropology at the University of East London, Vice President of the European Society for Astronomy in Culture (SEAC), member of the Avebury Sacred Sites Forum, part time lecturer for the Worker's Educational Association.

I fully sympathise, Borry, but we have to distinguish between the two purposes of academese. Far and away its most useful attribute is to say nothing without revealing the trite set of truisms and can-never-be-provens contained in the paper. The other, much rarer use, is to disguise a position that is quite radical without scaring the sleeping horses. Thus

sounds like at least one made-up number too far but could be applied to our own Megalithic Empire model by taking the present rural population and making various adjustments to take into account purely modern and non-agricultural additions -- I am assuming 'populations' refers to people and not statistics. Similarly

might appear gobblededooky but we ourselves hold that Stonehenge and Avebury are coupled whilst 'normal' stone circles are to be considered, not individually, but as a system. And so on. The scattergun listing of the author's titles is also revealing but not necessarily damning. I am myself a one-time part-time lecturer for the WEA but I wouldn't put it on my resumé if I was a head of a university department however emeritus. This by the way might indicate a case of Old Turk Syndrome i.e. someone who can afford to kick over the traces. Unless I wanted to signal my left-wing credentials but that hardly seems appropriate in this context.

We need to know more but I am loath to set Hatty loose on the paper itself as she has just returned from a holiday and needs a rest.

The chalk drums from Folkton and Lavant: Measuring devices from the time of Stonehenge

Investigating knowledge of mathematics and the use of standard units of measurement in prehistoric societies is a difficult task. For the British Neolithic period (4000–2500 bc), attempts to refine our understanding of mathematical knowledge for this period have been largely unsuccessful until now. Following recent research, we propose that there is a direct link between the design of the monument of Stonehenge and the chalk artefacts known as the Folkton and Lavant Drums, in which the Drums represent measurement standards that were essential for accurate and reproducible monument construction. This has important implications for future analyses of artefacts and monuments for this period.

Frustratingly, the juicy bits (including the full-frontal pictures) seem to be hidden behind an academic paywall.

Although they appear to be from Yorkshire.

The Folkton Drums are a unique set of three decorated chalk objects in the shape of drums or solid cylinders dating from the Neolithic period. .. The dimensions of the drums may be significant: archaeologist Anne Teather notes that the circumferences of the drums form whole-number divisions (ten, nine and eight times, respectively) of ten long feet, a widely used unit of measure in Neolithic Britain

Tisi, do you have long feet?

The Neolithic long foot, first proposed by archeologists Mike Parker Pearson and Andrew Chamberlain, is based upon calculations from surveys of Phase 1 elements at Stonehenge. They found that the underlying diameters of the stone circles had been consistently laid out using multiples of a base unit amounting to 30 long feet, which they calculated to be 1.056 of a modern foot (12​43⁄64 inches or 0.3219 m).

Furthermore, this unit is identifiable in the dimensions of some stone lintels at the site and in the diameter of the "southern circle" at nearby Durrington Walls.

Tisi, I hope you are sitting comfortably for the next part?

and a similar object, the Lavant drum, excavated at Lavant, Sussex, again with a circumference divisible as a whole number into ten long feet

Note the Careful Ignoral by omission - no mention of Prof. Thom and Megalithic Yards.

Thom's Megalithic Yard died the death of the wrong, I think, not academic hostility. In TME we claim that Stonehenge is the metrical centre and Avebury the navigation one, so so far so good. Presumably the north needed its own set. There are three large circles up there (Thornhill, is it?) so maybe they have a similar set up, albeit on a smaller, out-station, repeater-signal sort of way.

Mick Harper wrote:Thom's Megalithic Yard died the death of the wrong, I think, not academic hostility.

Thom's Megalithic Yard died a death of the wrong kind of academics: archeos and historians that didn't understand mathematics well enough. As you say, not hostility, more like ignorance and "not invented here".

We should, however, be paying more attention to a mainstream archeo (Mike Parker Pearson) now proposing a Neolithic unit of measure. Only three generations after Thom.