'the practice of placing quartz stones in moorland streams so they would sparkle in moonlight and attract salmon to them in late summer and autumn'.

We've come across white stones and quartz stones but not in the context of luring animals. Or perhaps guiding them. Why stop at salmon? It could be quite a promising line of investigation.

Could there be a connection between eits and aits, or eyots, islets in the Thames that seem to be randomly placed?

Coincidentally, at the newly re-found henge-causeway near Woodbridge:

Substantial numbers of white pebbles, not common in the area, were also found beside the track.

Like carrying pebbles up hills to make cairns.
Or throwing coins in fountains ("voltive offerings")

It's not a question of folk memory but practicality. E.g. white arrows are painted on tree trunks as waymarkers in woods.

The 'tradition' of throwing coins into a well seems to be part of the well-developed medieval pilgrimage industry.

Shell beaches are dazzlingly white. They're supposed to be natural features but if so, why are they so rare?

Ah yes, white pebbles are in some ways more practical than painting white lines on the road.

They are tolls. Megalithics were always looking for ways for tolls to be paid but not to be nicked by the next wayfarer. Once a month it was worth going in to collect it all.

Mick Harper wrote:They are tolls. Megalithics were always looking for ways for tolls to be paid but not to be nicked by the next wayfarer. Once a month it was worth going in to collect it all.

Oh. I thought it was all bronze-age Army Surplus dumps.

On the subject of white, have we mentioned the brilliant white shell beach of the island of Herm?

Anyway, archaeologists from Guernsey recently excavated St Tugual's Chapel on Herm. It's thought to be a twelfth-century structure belonging to Augustinian monks but the chief archaeologist has strangely little interest in its history or unusual dedication.

The early history of St Tugual’s Chapel is extremely obscure. JohnMcCormack has previously remarked that the north ‘cell’ may be early fourteenth century in date, but more recently he has revised his opinion (pers. comm.), suggesting that this is the earliest part of the structure, perhaps of the tenth or eleventh century. The main east/west building was added later, probably in the twelfth or thirteenth century.

That there was a chapel on Herm at this timeis confirmed by various medieval documents collected in the Cartulaire des IlesNormandes : for example a papal bull of Pope Urban III, issued on 24 August 1186, confirming that the island of Herm and its church were under the authority of the Augustinian abbot at Cherbourg

Tugual is more often called Tudwal. Whatever. Tugual, Tudwal & co. = one of the seven founder saints of Brittany and is said to have lived in the sixth century though not apparently on Herm, preferring another offshore island though this time off the north coast of Wales. St Tudwal's, off the Lleyn peninsula, was founded in 1291 and is also an Augustinian priory.

Wiki says St Tudwal is portrayed as a bishop holding a dragon and his feast day is either 30th November or 1st December, avoiding All Saints Day itself. But then again, Tudwal isn't in the magisterial Dictionary of Welsh Biography which lists every saint known or unknown as the case may be.

On the distribution of Carthaginian coins in Britain. 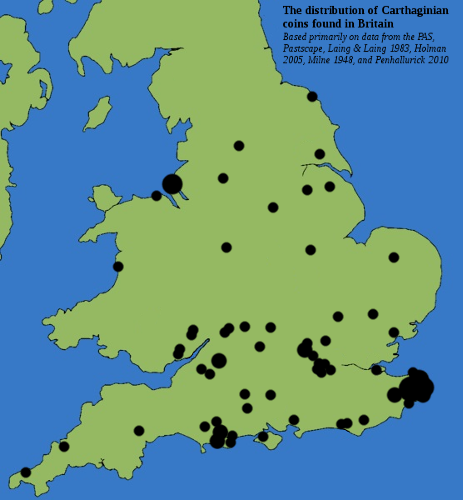 The biggest black blob is (what was) the Isle of Thanet. Then Poole Harbour. I dunno why Liverpool is next. 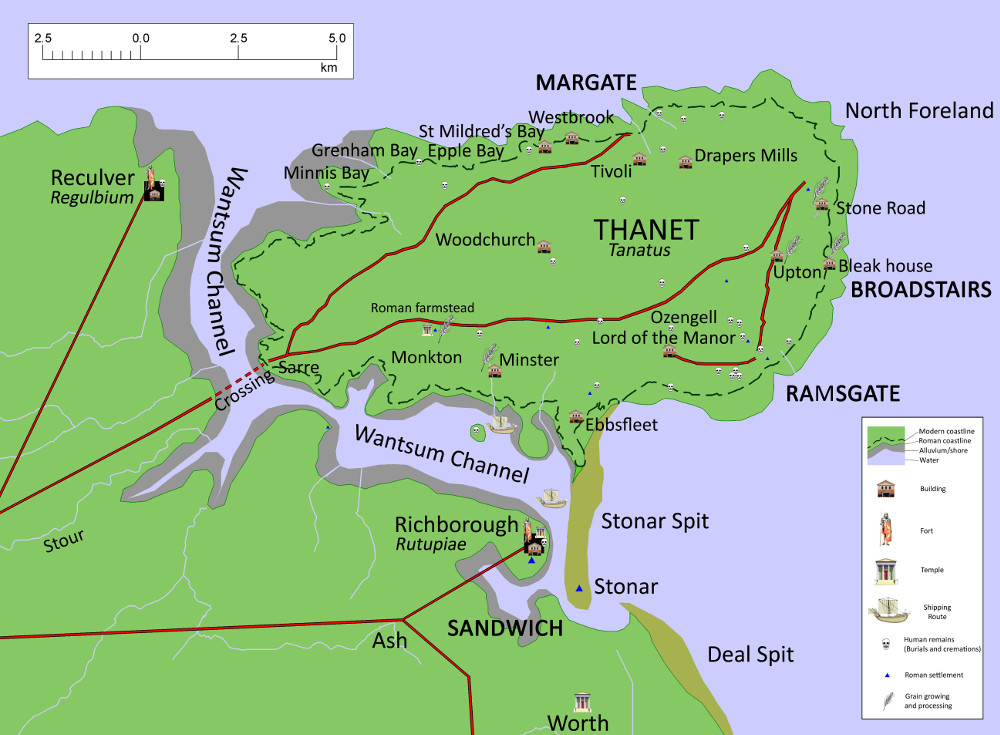 Vennemann argues at length that an acceptable and plausible root for the original British form of the name Thanet—*Tanitā, *Tanetā or *Tanetos/-is, according to Coates (4)—is actually available in the Punic language via a name 'Y TNT, meaning the 'Isle (of) Tanit', the chief goddess of the great, ancient Phoenician mercantile power of Carthage

Moreover, recent work on British place-names suggests that Thanet may not, in fact, stand alone, and is instead one of a small number of obscure and difficult names from Britain that could potentially have Proto-Semitic/Punic roots. So, for example, Rame Head in Cornwall is an Iron Age promontory fort that guards the entrance to the large, natural deep water harbour of Plymouth Sound and the associated 'Tamar Estuary Iron Age coastal node'. This name—Rame in 1086 and thereafter—is, according to Oliver Padel, 'completely obscure' and 'unexplained', with no convincing explanation possible in either Cornish or English; however, it has been pointed out that there may well be such a potential and appropriate explanation available in Proto-Semitic, via the Semitic height-word *rām, as found in the modern place-names Ramat Gan, Israel, and Ramallah, Palestine (Proto-Semitic root *rwm), which would fit this imposing, conical headland well.

Tisi, did you mention something similar with "Dor" places?

I was wondering if Tel Dor in Israel had any connection with Dorset or Durdle Dor or even Durness at the other end of the Belinus line.

Both Marazion (reputedly Cornwall's oldest town) and Camelford have been cited as Carthaginian/Phoenician names. I am intrigued by the three Carthaginian hotspots (Cornwall doesn't seem to be one!) of Poole, Thanet and Liverpool. We know all about the first two but this is the first time the Mersey has featured in anything. This is itself strange since it would seem far superior for Irish trade than the Dee estuary which everyone seems to have used instead. We need to know what attracted the Carthaginians here. Cue a song from Gerry Marsden.