A 'bog totem' found in the northern wastes of Siberia, was made from a 'freshly-cut larch tree that was at least 157 years old'. As is their wont, archaeologists assuring us it was very, very old used the pyramids as their bench-mark of ancientness. http://www.mnn.com/lifestyle/arts-cultu ... -years-old

Thousands of years before the ancient Egyptians quarried even the first block of granite for the great pyramids, a massive wooden totem nearly 17.5 feet tall fell into a peat bog in the western fringes of Siberia, Russia. There it lay, preserved in a kind of natural time capsule, until it was discovered in 1894.

Called the Big Shigir Idol, the mysterious statue has baffled researchers for decades due to the coded hieroglyphics covering its surface. While some have surmised that it may contain stories about the creation of the world by ancient man, others believe it to be nothing more than decoration. One thing we do know for sure: This thing is old — really, really, old.

Now, with even more hi-tech dating methods, it is found to be 11,000 years old (no longer 'roughly') which is quite significant in terms of putative ice ages and sea level changes. None of that is mentioned in the article though.

Back in 1997, an initial analysis using radiocarbon dating placed the Shigir Idol's age at roughly 9,500 years. A new analysis this year using seven small wooden samples from the Idol placed inside an accelerated mass spectrometer determined it to be 11,000 years old.

The totem appears to have been preserved more or less intact but if the dating can be subsequently found to be out by one and a half thousand years, does that not have implications for other remains elsewhere such as 'bog bodies' (Lindow Man etc.)? 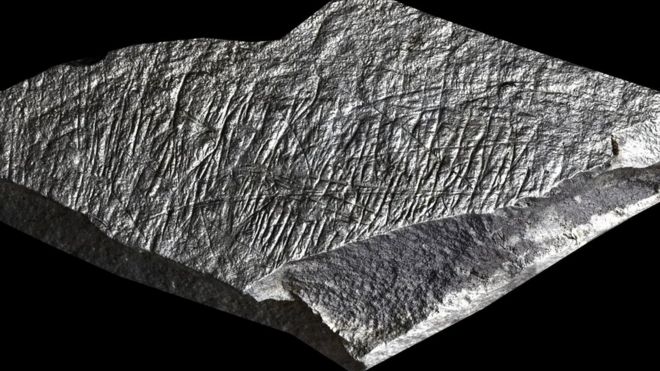 A report on the BBC site tells us of an archaeological dig in Jersey in which artifacts dating back 14,000 years have been found. I had always assumed that the ice age finished about ten to twelve thousand years ago. Obviously wrongly. So, people were about a few thousand years earlier. If they were here at that time when exactly did they get there or did they never leave?

Dr Chantal Conneller is co-director of the Ice Age Island project, which for five years has been working on the Les Varines site in the south east area of Jersey. She told the BBC: "We're feeling reasonably confident at the moment that what we've got fits into this broader idea of non-representational Magdalenian art."

The Magdalenians were one of several hunter-gatherer cultures which gradually re-colonised Europe as the ice retreated, 16,000 to 13,000 years ago.

And what exactly do they mean by 'non-representational ... art'?

Perhaps the flat stones were used as working surfaces for cutting things like meat, leather, wood for tools etc?

Unless they were counting things by marking them off. But why art? They certainly knew how to draw animals and presumably could decorate with patterns but the idea that random scratches are art seems strange to me.

Anyway we now have it that people were living this far north about 16,000 years ago.

It certainly looks more like a whetstone than 'engravings'.

I had to look up Magdalenian. It used to be called 'The Age of the Reindeer' which is more useful though less erudite-sounding.

The Madelenian epoch was a long one, represented by numerous stations, whose contents show progress in the arts and general culture. It was characterized by a cold and dry climate, the existence of man in association with the reindeer, and the extinction of the mammoth. The use of bone and ivory for various implements, already begun in the preceding Solutrian epoch, was much increased, and the period is essentially a Bone age. The bone instruments are quite varied: spear-points; harpoon-heads, borers, hooks and needles.

Most remarkable is the evidence La Madeleine affords of prehistoric art. Numbers of bones, reindeer antlers and animal teeth were found, with rude pictures, carved or etched on them, of seals, fishes, reindeer, mammoths and other creatures.

According to Wiki the earliest 'Magdalenian' sites were found in France. Reindeer people originating in southern France (Magdalenian was apparently named for an ancient rock shelter, La Madeleine, in the Dordogne region of south-west France) seems a tad unlikely. Presumably artefacts belonging to this 'Magdalenian culture' in France and Spain are the youngest, not oldest, remains.

It seems the Jersey finds, imprecisely dated or not, support the hypothesis of a nomadic, reindeer-centred way of life eminently suited to cold conditions.

It seems the Jersey finds, imprecisely dated or not, support the hypothesis of a nomadic, reindeer-centred way of life eminently suited to cold conditions.

And at a time when Europe is supposed to have still been covered with ice.

Which means that the holiday makers sunning themselves in the Spanish refuges were late starters in moving north.

"Something unusual seems to be coming on us from the stars"
The words of Cassiodorus, describing the Halley Comet(?) approaching Earth, c.536AD.

Nice video here: https://www.youtube.com/watch?v=0POfUod85Wk
on the "Comet of 536 and the Ravenna Mosaics" by Ruth Dwyer Ph.D

So, how do we get another comet striking Britain in 562AD?
https://www.youtube.com/watch?v=fZQKpsy2OgM
This is allegedly the one that prompted Gildas to emigrate to Brittany.

What ever it was, a lot of trees fell over in the 6th Century, according to Professor Michael Baillie of Queens College Belfast.
https://www.youtube.com/watch?v=zbXon2C70IE

But we don't know when. Tut, calendars can be such fickle mistresses.

A lot of trees fell over in 1987. There was no comet strike as I recall.

No hurricane either according to Mr Fish.

I don't blame Fish for the fiasco...meteorologists are forced to resort to computers for their data. Professors of ancient climates and ecologies on the other hand are making stuff up, and providing their colleagues in the history department with an explanation for the European Dark Ages. Rather handy.

The question is why Velikovsky is considered out to lunch and Professor Baillie's 'cometary debris theory' treated with respect instead of derision.

Talking of making stuff up, it seems the whole 'hunter-gatherer' argument is rot....Swedish archaeologists found a site with remains of 'large-scale' fish fermentation, "a traditional way of preserving fish" that itself is only rarely preserved as they explained

In other words, if you can't find traces of a settled way of life you take it as read there was no such thing even though it has persisted even unto the present day.

The discovery is also an indication that Nordic societies were far more developed 9,200 years ago than what was previously believed. The findings are important as it is usually argued that people in the north lived relatively mobile lives, while people in the Levant – a large area in the Middle East – became settled and began to farm and raise cattle much earlier.

Yes, it's hard to argue there would have been one and only one fish fermentation plant in the whole of Scandinavia.

Notice how they're already backtracking from their beloved hunter-gatherers though.... "it is usually argued..." and "relatively mobile lives..." without saying 'Oops, we got that completely wrong, folks'.

The even larger-scale fermentation industries - beer and wine - tend to leave even less evidence. But you have to stay in one place to make the stuff. Nomadic brewing would be a messy and oxymoronic business.