The maps on Wiki suggest that the Angles, Jutes and Saxons lived next door to each other in Denmark and north eastern Germany to the Dutch border.

If this is true then it is apparent that the language of England, English, was not the language of that area of Denmark unless it really was Anglo Saxon and underwent a dramatic change after the Normans invaded.

Whatever the three groups were up to on the continent has no bearing on the English language in England and for that matter Scotland.

The Danes were and always were part of the Scandinavian group of languages well into the later middle ages and beyond.

If these three groups did settle in England their languages may have formed part of the language of an elite aristocracy but with the advent of Latin, another elite language, and then Norman French a third elite language the 'Angle, Saxon and Jutish' elite associated themselves with the latter two languages and left their ancestral languages behind. Leaving the serfs and villeins to carry on with their own language as they had always done.

Didn't we mention this previously?

It was something about when the new Norman Overlords bashed their way into Britain. Then a high proportion of the old Overlords said something like "It's a fair cop guv" or "Blow this for a game of soldiers" and packed their bags and went home to "Saxon" lands.

Then they went onto places like the Eastern Mediterranean and Egypt(?)

So their overlord elite language rapidly faded from British memories as well.

Well it looks like Royalty is an international brand.

The last English king Edgar the Aethling was born in Hungary. His father was exiled to Sweden before going on to Kiev and then Hungary. They got about a lot in them boats of theirs.

Edgar was even forgiven by William until he decided to rebel. They do like to keep these family feuds personal. 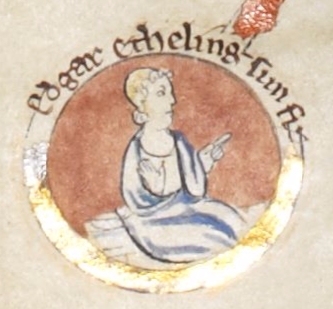 And even Harold was a funny sort of Saxon with hairy Vikings for relatives.

And as for Cnut. He thought he was Moses didn't he?

What's the evidence that the name Saxon has anything to do with salt? In just about every European language of the Indo-European family, the word for salt is s[vowel]l. Where there's a further consonant it's after the l and it tends to be a t or tz sound. There's a list here: http://www.indifferentlanguages.com/words/salt Note that Albanian and Basque are not Indo-European languages (nor are Finnish and Estonian, or Hungarian). So without the l, the linguistic link seems missing.

It also seems odd to name a nation "the salt people" when salt is consumed and produced everywhere. Is it alleged they adopted this name themselves or were given it? Who by?

Saxon and Sassenach are variants, certainly, and other variants reverse the k and s, eg saski, that's a common process.

Welcome, Mr Bmblbzzz. Not from round here by the sound of it. The origin of the Saxon/salt connection was the simple observation that the largest salt brand in Britain is Saxa. But I don't think we ever did get to the bottom of that and obviously that alone is no reason to believe in the link. And yet it has proven fruitful over the years. Even if in the end it proves false.

It also seems odd to name a nation "the salt people" when salt is consumed and produced everywhere.

That is the point. Salt is the only substance (I can think of) that is both a necessity and not always readily available. It is also immensely useful and available everywhere at different prices. Hence the salt-trade. Hence the emphasis on Saxons as (salt) traders. Saxony is also the chief source of rock salt in Europe though not necessarily where the Saxons lived.

Saxon seems to have been a Latin word at heart which was taken up by various religious scholars as a generic description of the English. Who called themselves English or Inglis.

Procopius mentioned that he met three people from Britain who told him that because of over population the three tribes were leaving. These were Britons who were moving to Brittany and Anglii and Frisonii who went to fight the Thuringians for the French king. They were granted lands in that area and started calling themselves Saxons at that point. I've lost the reference but it's somewhere out there.

However, another strange theory links it in with the idea that the ancient Britons were Jewish in origin. This one from W.H.Bennett who seems to have made it his speciality.

Historian Sharon Turner verified the Medo-Persian connection, saying, “This important fact of a part of Armenia having been named SAKASINA, is mentioned by [ancient Roman historian] Strabo in another place, and seems to give a geographical locality to our primeval ancestors, and to account for the PERSIAN WORDS THAT OCCUR IN THE SAXON LANGUAGE, as they must have come into Armenia from the northern regions of Persia.” (History of the Anglo-Saxons, I:100-101) The early Saxon language included hundreds of Medo-Persian words, indicating that the ancestors of the Saxons had resided in Medo-Persia for some time before migrating through the Caucasus Mountains into Europe. Sharon Turner gives yet additional proof that the modern Anglo-Saxon peoples are descended from the ancient SAKA, whom we identified as the lost tribes of the house of Isaac. He says, “These marauding SAKAI or Saka-sani, were gradually propelled to the western coasts of Europe… There was a people called SAXOI on the Euxine [Black Sea], according to [early 6th century historian] Stephanus [Byzantius].” These writers refer to the Israelites in Media as SACA, SAKAI, or SAXOI. Since ancient writers declare that the Saxons of Europe were descended from the Sacae who came into Europe from Media, and as language study identifies the Sacae as the house of Isaac, we have a positive chain of evidence proving the Israelitish identity of the Saxons.

Mick Harper wrote:Welcome, Mr Bmblbzzz. Not from round here by the sound of it.

Thanks. I did look for a "Hello" thread but couldn't see one. I'm from right here. My here might be your there, of course.

So IIUC you're referring to Saxons as, originally, salt traders from anywhere to anywhere rather than anything we might think of as a nation? That is, they need not have any links of language, blood, ruler, religion, territory, etc.

You only have to look at the number of -wich towns in Britain to realise there was plenty of native salt production from pits or mines.

Droitwich in Worcestershire and the four -wich towns of Middlewich, Nantwich, Northwich and Leftwich in Cheshire.

In the Domesday Book Middlewich is spelt "Mildestvich"; the termination wic or wyc in Old English refers to a settlement, village or dwelling. It is also supposed that "wich" or "wych" refers to a salt town, with Middlewich being the middle town between Northwich and Nantwich. Middlewich was founded by the Romans, who gave it the name Salinae because of its surrounding salt deposits. It became one of the major Roman sites for salt production, an activity that was centred on the township of Kinderton.
...
Salt manufacture has remained the principal industry for the past 2,000 years